“The past is always happy and the future also. Only the present hurts,” says Michel Houellebecq in this very rare interview, which the French author has said is his last public stage interview. Considered one of the most important European writers today, Houellebecq speaks with great generosity and humour about love, religion and happiness, offering thoughtful insight into his work, including his most recent novel, the praised ‘Serotonin’ (2019). Read more …

Houellebecq begins speaking about his childhood, about what kind of a child he was, and how he started writing because he nurtured an early love of reading, particularly Hans Christian Andersen and Jules Verne. He admits that he was “devastated” by reading the ‘Little Match Girl’. “Even animals, they learn through imitation. And I think there is a sense of imitation in writing at the beginning.” Reading, he feels, is a vital necessity because we need to be able to live parallel lives: “Humans generally have too complex a brain for the life they live. A large part of their brain capacity isn’t used. And one life isn’t enough. You need to have parallel lives or you can’t resist.” Writing, however, requires a belief that you have something to add: “You need to have a certain megalomania to publish.”

The French author found inspiration in St Paul: “When I read St Paul I have the feeling that he’s here. I can almost hear him breathe. It’s hallucinating.” Houellebecq went to church for many years: “I believed in God for the duration of the mass. I’m very sensitive to collective emotion. But as soon as I’m out, it’s gone”, he says. Instead he prefers Epicurus’s famous reasoning that “one shouldn’t fear death since when we are, death isn’t and when death is, we are not. It works on me,” he says. “It soothes me instantaneously and it’s a nonreligious reasoning.”

Furthermore, Houellebecq shares how he doesn’t always succeed with his novels, and how falling in love with a specific sentence can be part of the reason for that: “Sometimes you spoil a book just because you wanted a particular sentence.” The theme of betrayal, which plays a significant role in ‘Serotonin’, was in fact something that he aimed for in one of his earlier novels, but didn’t’ succeed with due to his satisfaction with the last sentence of the book: “The theme of betrayal and the ensuing remorse is what I wanted to do in ‘Submission’ (2015), but I failed.” Finally, Houellebecq emphasises that what ensures the survival of writers is not the accolades that they receive: “Writers who survive are writers who have younger disciples who are themselves good writers. That’s the way it works, really. So I watch my disciples with great interest.”

Michel Houellebecq (b. 1958) is a French writer and poet, who is particularly known for his often controversial novels, which hold up a mirror to the grim truths of contemporary France. His international breakthrough was with ‘The Elementary Particles’ (Les Particules Élémentaires, 1998), which became “an instant nihilistic classic.” Other novels include ‘Platform’ (Plateforme, 2001), ‘The Possibility of an Island’ (La Possibilité d’une Ile, 2005), ‘The Map and the Territory’ (La Carte et le Territoire, 2010), which won the prestigious Prix Goncourt, ‘Submission’ (Soumission, 2015), and ‘Serotonin’ (Sérotonine, 2019). Houellebecq has also published several books of poems, including ‘The Pursuit of Happiness’ (1991), and ‘The Art of Struggle’ (Le sens du combat, 1996). Houellebecq is the recipient of several prestigious awards including the Austrian State Prize and the International IMPAC Dublin Literary Award (2002), and in 2019 he was made a Chevalier of the Légion d’honneur by French president Emmanuel Macron.

Michel Houellebecq was interviewed by Rune Lykkeberg and translated by Tore Leifer at the Louisiana Literature festival at the Louisiana Museum of Modern Art in Humlebæk, Denmark in August 2019. At the event, Danish actor Jens Albinus read out two passages from ‘Serotonin’, which were chosen by Houellebecq: pages 5-7 and 50-51 in the French edition. 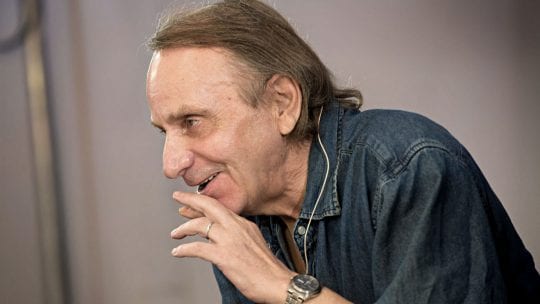