“There’s a form of coalition inside these pictures.”

French-Algerian artist Mohamed Bourouissa takes us on a tour of his 2003 photographic series about his generation of young, second-generation immigrants from suburban Paris. Read more …

Nous Sommes Halles (meaning “We Are Halles”) was shot by Mohamed Bourouissa and Anoushkashoot between 2003 and 2005. The series consists of portraits of strangers the two met in the neighborhood of Châtelet Les Halles in Paris. “There’s a form of coalition inside these pictures,” he says. The portraits of his peers show young people wearing specific religious or cultural symbols together with high-end brands that create a sort of assemblage.

“This brand, Lacoste, was in this time very significant for us and so many other young people from the suburb. The brand was originally for people with money. It was a symbol of fortune, of the high society,” he says and points out that by wearing clothes and accessories with the brand logo “all of the young people from the suburb started to reappropriate this brand.” We see a young girl wearing a Lacoste bum bag paired with a keychain of the Hand of Fatima. Bourouissa believes that this created their own, new culture.

He goes on to explain the significance of Lacoste at the time around 2003. “It’s so interesting because, at the time, you had all these images of advertising with white people with Lacoste,” he says and continues: “The only people who wore it in the streets were the people from the suburbs whose parents came from immigration.” But things change, as Bourouissa says: “It’s so interesting to see that now they are using Black people, Arabic people for their advertising.” Reflecting upon this he continues: “But it’s all about capitalism. They don’t care about what symbol they use. They just want to sell their stuff in the end.”

Mohamed Bourouissa (b. 1978) was born in Blida, Algeria. Today he lives and works in Paris, France. He have had solo exhibitions at Musée d’Art Moderne de la Ville de Paris, Barnes Foundation in Philadelphia, Stedelijk Museum in Amsterdam, Haus der Kunst in Münich and most recently Kunsthal Charlottenborg in Copenhagen. He has also participated in many group exhibitions and biennials in Sydney, Sharjah, Havana, Lyon, Venice, Algeria, Liverpool, and Berlin. He was nominated for the art award Le Prix Marcel Duchamp in 2018, and in 2020 he was awarded the Deutsche Börse Photography Foundation Award.

Mohamed Bourouissa was interviewed by Roxanne Bagheshirin Lærkesen in October 2021 in his solo exhibition HARA!!!!!!hAAARAAAAA!!!!!hHARAAA!!! at Kunsthal Charlottenborg in Copenhagen, Denmark. 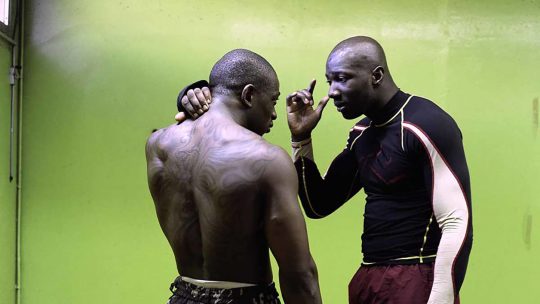 “I work with people, who others say is marginalized, but for me, they are in the society."

Mohamed Bourouissa
Your Subculture is My Culture