Niels Fredrik Dahl
I Write to Be

"The only way to get to write is to sit down and write.”

“Literature was a place that offered a space for all of me,” says the award-winning Norwegian writer Niels Fredrik Dahl in this openhearted interview. Watch him talk about literature, which he describes as a sanctuary, but also “like white spots on the map” that he has to explore. Read more …

Dahl admits that he feels bad when he doesn’t write. He considers writing a way to place himself with others and to achieve visibility: “I think I write to be. To be visible to myself. I write so that the world becomes visible to me.” Writing, he continues, is the language that he has, and something that doesn’t come easy: “The problem is that I don’t have that language when I don’t write. So the language I have, I must fight for every time in order to get into it.” Sometimes, he adds, he doesn’t succeed, and he has to remind himself that “the only way to get to write is to sit down and write.”

Niels Fredrik Dahl (b. 1957) is a Norwegian novelist, poet and dramatist. Dahl was awarded the Brage Prize in 2002 for the novel ‘På vei til en venn’ (Visiting a Friend) as well as The Ibsen Award that same year. Other books include ‘Herre’ (Lord) (2009) and ‘Mor om natten’ (Mother by Night) (2017). Dahl has also written scripts for TV series.

Niels Fredrik Dahl was interviewed by Anette Dina Sørensen in August 2018 in connection with the Louisiana Literature festival at the Louisiana Museum of Modern Art in Humlebæk, Denmark.

“I totally depend on reading.” 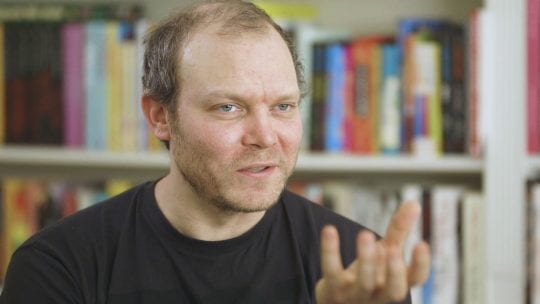 “You spend your entire career trying to find out why you’re writing."

Johan Harstad
Fiction is Closer to the Truth