“Quality is an attitude of mind.” The great architectural mastermind of our time Norman Foster, who turned 80 in June 2015, here reflects on a long and prosperous career – and life – with prominent buildings and more than 1,000 employees all over the world. Read more …

Foster has always considered technology to be an ally. As a child he was immensely excited by machines and their speed – he spent many hours making sketches of and reading about them. He left school at age 16, did National Service for two years, worked different jobs to earn money, but never abandoned his private world of drawing and dreaming. When he discovered that he as an architect could actually do the things that had always excited him, it simply didn’t feel like work.

Respecting the structure of a city or a place is essential: “I’ve realized the important links between individual buildings and infrastructure.” Architecture has to address the bigger issues and make a difference to the world we live in. Architects can’t solve every problem in the world, but what they can do, however, is to contribute by turning the complex into something simple via shape as well as material and being aware of the “urban glue” that binds everything together: “We have rethought, redesigned, reinvented. We have questioned and gone back to basics.”

Norman Robert Foster (b. 1935) is an English architect and designer, who is considered one of the most prolific architects of his generation. He is the founder of Foster and Partners (1967) and responsible for renowned buildings such as London City Hall and Millennium Bridge (London), Reichstag (Berlin), Bilbao Metro, Hearst Tower (New York), Hong Kong International Airport, Beijing Capital International Airport and Apple Spaceship Headquarters (est. 2016). Foster, who is a Fellow of the Chartered Society of Designers and winner of the society’s highest award, The Minerva Medal, has received several awards such as the Pritzker-prize in 1999 (often referred to as the Nobel Prize of architecture), the Stirling Prize in 1998 and 2004, as well as the Aga Khan Award for Architecture – the biggest architectural award in the world – for the University of Technology Petronas in Malaysia (2007). He was knighted in 1990, and in 1999 he was created a life peer, as Baron Foster of Thames Bank, of Reddish in the County of Greater Manchester.

Norman Foster was interviewed by Marc-Christoph Wagner in his home near Geneva, Switzerland in April 2015. 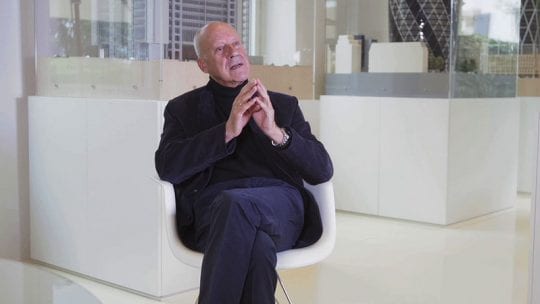 Norman Foster
Advice to the Young 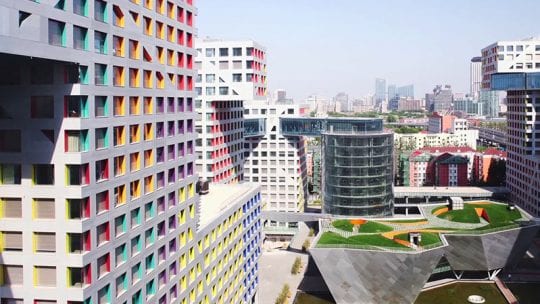