Like lava from a volcano, Olafur Eliasson’s fascinating installation ‘Riverbed’ runs through the Danish Louisiana Museum of Modern Art. The highly praised artist here shares his intriguing thoughts behind the installation. Read more …

“The currency of trust” is the fundament on which ‘Riverbed’ is built – an installation that, according to Eliasson, bears resemblance to both the contemplative power of a Japanese garden as well as of ancient Pompeii after the destructive outbreak of Mount Vesuvius. In our society, a lot of things are defined by exclusion, and public institutions such as museums have to show that they have full trust in the artwork, the artist and the visitor in order for the latter to feel completely included. “If an audience feels trusted, then they dare to get involved”, says Eliasson. To fully experience the installation, the visitors have to feel comfortable destabilizing themselves on purpose, in this case e.g. by rethinking their way of walking on the many rocks of his work.

The concept of reality intrigues Eliasson, who finds that the way we engage in the world is based on our ‘model’, whether it be a social, cultural or other type of model: “The way we take in the world is not natural, it’s cultural.” Thereby, it becomes a construction in which “the authorship of reality lies within the beholder and the museum is constituted by the visitor.” In other words, reality becomes the way in which you choose to perceive or handle your model. ‘Riverbed’ is thus a part of this unreality, for as Eliasson concludes, “There are no real things.”

Olafur Eliasson (b. 1967) works with sculpture, painting, photography, film and installations. He grew up in Iceland and Denmark and studied at the Royal Danish Academy of Fine arts from 1989-1995. In 1995 he moved to Berlin where he founded Studio Olafur Eliasson. Eliasson is behind many major exhibitions and projects around the world, such as ‘The Weather Project’ at Tate Modern’s Turbine Hall in 2003, ‘Take Your Time: Olafur Eliasson’ organized by SFMOMA in 2007, which travelled until 2010 to major venues such the Museum of Modern Art, New York, and ‘Riverbed’ at Louisiana Museum of Modern Art, Denmark in 2014. Among Eliasson’s projects in public space are ‘Green River’, carried out in various cities from 1998-2001 and ‘The Serpentine Gallery Pavilion’ in 2007 in collaboration with Kjetil Thorsen of Snøhetta. He lives and works in Copenhagen and Berlin.

Olafur Eliasson was interviewed by Marc-Christoph Wagner at Louisiana Museum of Modern Art, Denmark in 2014. 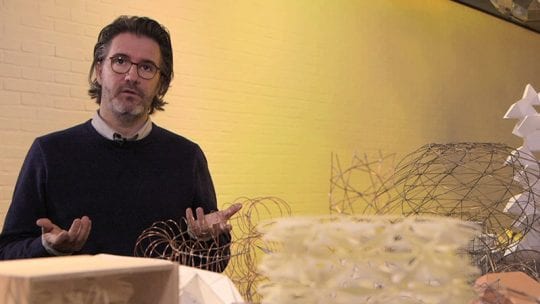 Olafur Eliasson
Advice to the Young