“We didn’t do anything because that was what life was like back then,” says Swedish author Jonas Gardell in this deeply moving interview about what homosexuals in Sweden had to endure during the prejudice surrounding the 1980s AIDS epidemic. Read more …

“When I read them now, I am outraged and upset.” While doing research for the novel trilogy ‘Don’t Ever Wipe Tears Without Gloves’ (2012), Gardell – who has been openly homosexual since the early 1980s – was shocked by how homosexuals had been portrayed in texts 30 years earlier. Moreover, he was shaken by the realization that they had been so used to being treated badly, that they simply didn’t reflect on it: “I’d be in a restaurant and a stranger would walk over and say: “How does it feel to spread AIDS, you son of a bitch?” And then he’d stub out his cigarette in my food and leave. And I just kept eating.”

Gardell emphasizes that what he really wanted with the novel trilogy was to “tell our story”, and for people to start listening this time around, instead of simply being in denial: “What ‘Don’t Ever Wipe Tears Without Gloves’ ultimately asks is: What does it mean to be human? When do we stop being human? When do we lose our right to call ourselves human? … How many beggars can I pass? How many refugees can I ban from my safe country without losing the right to call myself human? There’s a line. Don’t cross it, because then you won’t be human.”

Jonas Gardell (b. 1963) is a Swedish novelist, playwright, screenwriter and comedian. His novel trilogy ‘Don’t Ever Wipe Tears Without Gloves’ (2012) had a huge political and popular impact in Sweden, and the reviewers proclaimed it a classic of Swedish literature. The trilogy – which Gardell discusses in this video interview – is the personal and deeply moving story of a generation of homosexual men, who had to battle not only the HIV virus but also the contemptuous gaze of society. Gardell is also the author of the novel ‘The Passion Play’ (1985) as well as several other novels, plays and screenplays.

Jonas Gardell was interviewed by Kim Skotte in connection with the Louisiana Literature festival at the Louisiana Museum of Modern Art, Denmark in August 2015. 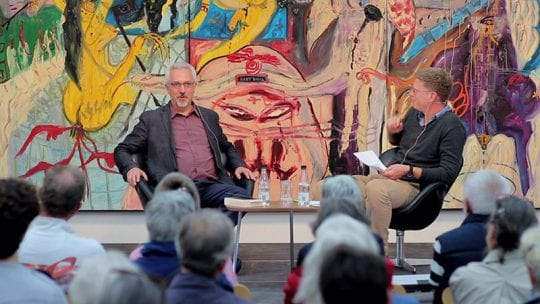 Alan Hollinghurst
The Secret Life of a Poem