“You want to understand why the world is the way it is.”

“You want to understand why the world is the way it is.” In this video, the Nigerian Belgium-based “powerhouse” artist Otobong Nkanga explains why curiosity is her driving force and why motivation is external as well as internal. Read more …

If passion and motivation lacks, Nkanga argues, “it leads to many questions of existence – what am I doing here? Why am I here?” In our modern world where the discrepancies are vast, motivation is not only found within yourself but also in your environment – in your support from people as well as in your physical surroundings: “I have been fortunate to be in places where all these things align.” What you put out into the world, Nkanga continues, “is to be considered, is to be weighed. You’re not just doing it for yourself. You’re doing it for many other people and beings… Whatever you’re doing, you’re considering those parts because they are part of everything that makes you exist.” Furthermore, Nkanga feels that her curiosity and her longing to know things is an integral part of what drives her: “It’s a lifetime’s work. You end up going with just ‘I don’t knows’ and opening up doors and being passionate. And once your body, your health, your soul, everything is allowing you to do that, you do it.”

Otobong Nkanga (b. 1974) is a Nigerian visual- and performance artist, who explores the contested social and political histories of colonialism, with a particular focus on the relationship between Africa and the Western world. As an example, Nkanga – through, e.g. performance, drawing, photography, sculpture and installation –  examines how raw minerals are transported through various covert economies and transformed into desirable consumer objects. Her work has been featured in many prestigious institutions including Stedelijk Museum in Amsterdam and Tate Modern in London. Nkanga has also participated in the 31st São Paolo Biennial (2014), 8th Berlin Biennale (2014), the 20th Biennale of Sydney (2016), as well as the 58th International Art Exhibition – La Biennale di Venezia in 2019 where she received a Special Mention. Moreover, she is the recipient of the 2015 Yanghyun Prize, the 2017 Belgian Art Prize and the 2019 Flemish Culture Prize, Ultimas. Nkanga lives in Belgium.

Otobong Nkanga was interviewed by Helle Fagralid at the Louisiana Museum of Modern Art, Denmark in June 2019 in connection with the exhibition ‘Homeless Souls’. 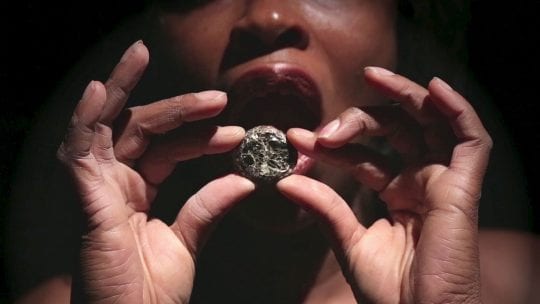 “What artists do is open different portals."

Otobong Nkanga
Portals to Other Worlds