Otobong Nkanga
Portals to Other Worlds

“What artists do is open different portals."

Meet Nigerian artist Otobong Nkanga, who has been called “one of the most exciting artists working today.” In this video, she presents her mesmerising work and explains how she uses a wide range of mediums to examine how things connect us, and how we are connected to things. Read more …

“What artists do is open different portals. Open up also to the worlds of terror.” What art – e.g. a Goya painting – can make us recognise, Nkanga argues, is that the past is not that different from the present: “It’s just that the technology is different. But the rage, the fear, the anger, the terror is similar.” This, in consequence, makes us understand that we are not just an entity on our own and that we haven’t learned from the past: “It makes us understand the repetitions over time.” Nkanga is also interested in understanding how different cultures have informed the other and in investigating the idea of belonging: “I don’t directly enter into identity with the work, but I feel that it looms within that. It’s a very tricky place of thinking.” Finally, Nkanga emphasizes that her work is not just “a flat, neutral zone. It should be able to touch. It should be able to talk. It should be able to project through within the subject.” Hopefully, she concludes, her work can influence people to think a little differently and “then that person has the power to shift a little something for someone…”

Otobong Nkanga (b. 1974) is a Nigerian visual- and performance artist, who explores the contested social and political histories of colonialism, with a particular focus on the relationship between Africa and the Western world. As an example, Nkanga – through, e.g. performance, drawing, photography, sculpture and installation –  examines how raw minerals are transported through various covert economies and transformed into desirable consumer objects. Her work has been featured in many prestigious institutions including Stedelijk Museum in Amsterdam and Tate Modern in London. Nkanga has also participated in the 31st São Paolo Biennial (2014), 8th Berlin Biennale (2014), the 20th Biennale of Sydney (2016), as well as the 58th International Art Exhibition – La Biennale di Venezia in 2019 where she received a Special Mention. Moreover, she is the recipient of the 2015 Yanghyun Prize, the 2017 Belgian Art Prize and the 2019 Flemish Culture Prize, Ultimas. Nkanga lives in Belgium.

Otobong Nkanga was interviewed by Helle Fagralid at the Louisiana Museum of Modern Art, Denmark in June 2019 in connection with the exhibition ‘Homeless Souls’.

Cover photo: From ‘In Pursuit of Bling – Coalition’ 2014 by Otobong Nkanga 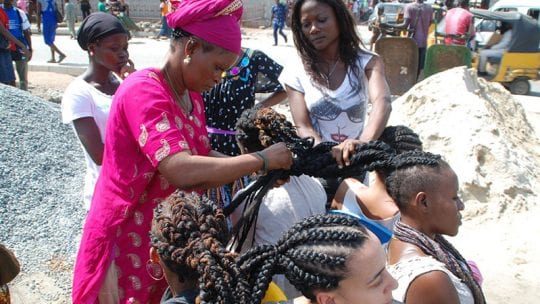 Wura-Natasha Ogunji
Beauty in the Streets of Lagos