“I think that children, who are more innocent, are better at wearing their masks than us adults.” In this video the Cameroonian born artist Pascale Marthine Tayou discusses his fascinating work, including his photographic series ‘L’Ecole des Clowns’. Read more …

Tayou argues that children at school are taught how to wear a mask, but lose this ability as they grow older, which is the notion that lies behind ‘L’Ecole des Clowns’. The project started when he came across a man, who was selling out things from his shop, and one of his boxes was full of clown costumes. This is symptomatic of how Tayou often comes across the subject of his work – by chance – and he values this element of discovery, of finding the unknown: “I like collecting things. Everything that comes into my hands presents a possibility, a potential, and always has a multifaceted life.”

“The life that we all lead is enveloped by a terrifying darkness. So one always has to have the courage to bring out the light.” According to Tayou, his work is also a way of bringing out this light in the world.

Pascale Marthine Tayou (b. 1966) is a Cameroonian born artist, whose artwork deals with translation, interpretation and displacements in general. Tayou’s work is recognised nationally and internationally and he has exhibited widely including at Musée du Louvre in Paris, Museum of Contemporary Art Detroit and Manchester Art Gallery. In 2011 Tayou won the ARKEN Prize, one of the biggest art prizes in Denmark. He lives and works in Belgium. For more about him see: http://www.pascalemarthinetayou.com/

Pascale Marthine Tayou was interviewed by Louise Hauerberg at his home in Ghent, Belgium in February 2016. 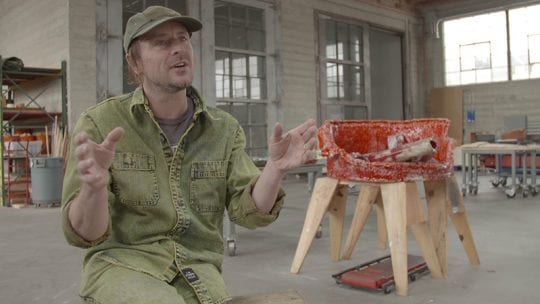 Sterling Ruby
A Bowl of Memories