Per Petterson
Who Do You Think You Are?

"If you know something is important, put it in right away."

Enjoy this cordial video interview with the award-winning Norwegian novelist Per Petterson on the gravity of writing, and the feeling of hubris he has come to associate with notebooks. Read more …

“I read. It’s a necessity of life.” When you read, Petterson feels, you are not alone. Not only do you have friends such as Ernest Hemingway, “but you see another world behind them. A whole world.” This world, he continues, can become your own: “I know more about the streets in Paris than in Trondheim, for instance.” In connection to this, Petterson talks about how it has become essential for him to “anchor things geographically, topographically,” which requires an effort: “We have to insert a kind of urgency, so it feels important though it’s just a road. It does feel important that you know exactly where that road is leading to.”

After a while, Petterson argues, you develop “a kind of detector,” which allows you to know if what you’ve started writing is literature or just text: “It’s this feeling of meaningfulness when you write. That it’s significant. It’s got surface and gravity, although you can’t explain it, because it doesn’t. It’s just words on paper or on a screen.” He doesn’t subscribe to the “crime-story way” of writing ordinary novels: “If you know something is important, put it in right away. See where it takes you instead of drawing out the time until the revelation of what was important.” Notebooks, Petterson continues, don’t work for him, though he always carries one with him: “It’s the Law of Jante. I’m writing, and I’m standing behind me and think, “Who do you think you are?” I have this sense of irony turned against myself.” It doesn’t help that he’s an established writer, quite the contrary, he explains.

Per Petterson was interviewed by Tore Leifer in connection with the Louisiana Literature festival at the Louisiana Museum of Modern Art in Humlebæk, Denmark in August 2019.

Tomas Espedal
My Books are About Language 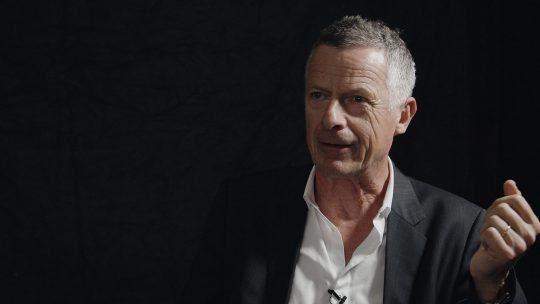 "The only way to get to write is to sit down and write.”

Niels Fredrik Dahl
I Write to Be