Most designers aim at creating innovative things. This makes it possible to be extraordinary by being ‘normal’, according to the unconventional icon of Dutch design, Piet Hein Eek, who has built a brand around designs made from discarded materials. Read more …

“If everybody tries to do very special things, and you do very normal things, you’re very special.” Piet Hein Eek jokes that even though many consider him to be rebellious, he is simply someone who tries to find his own territory, while following his common sense.

Eek’s designs are rational and simple to a degree that sometimes make him hesitate to call them designs. His focus is on optimizing and taking maximum advantage of his surroundings and available materials, instead of trying to invent something new and special. As a result of this, Eek tries to reverse the traditional way of considering design by acting as if labour costs nothing and material is worth a fortune.

Piet Hein Eek (b. 1967) is a Dutch designer, who graduated from the Academy for Industrial Design in Eindhoven in 1990. While studying at the Academy, he did the exam project ‘Scrap Wood Cupboards’ of which he sold all the cupboards and used the money to start his own design studio in 1992. Eek’s interest in old materials developed after restoring a cupboard for his sister, noticing that the old wood looked nicer than the new. His business is built around old materials, working outside the circuit of mass production. Eek’s work is sold in numerous galleries worldwide, and he has exhibited at venues such as MOMA, New York and Cíbone, Tokyo.

On the subject of his design method, Piet Hein Eek comments: “If you make honest furniture with natural materials, and it gets old or scratched, it still looks beautiful – its aesthetic value never diminishes.”

Piet Hein Eek was interviewed by Christian Lund at his factory in Eindhoven, February 2014. 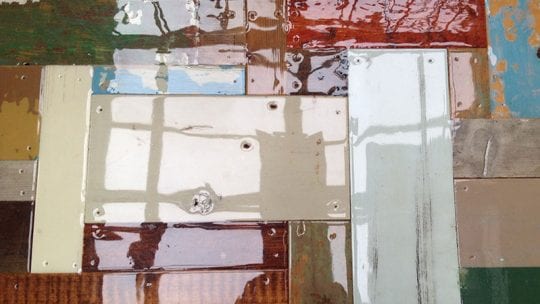 Anders Ruhwald
The Anatomy of a Home