Meet the sensuous Swiss video artist Pipilotti Rist, whose work full of colour and playfulness. She here argues that videos can have painterly qualities and tells the story of one of her most famous videos, where a woman smashes car windows with a flower.
Read more …

“There is no rule for when and where I get my ideas – some are survival tactics, some are psychotic tics, some are very well thought over.” The video ‘Ever is Over All’ (1997) was Rist’s response to a chief editor, who wouldn’t let her do the things she wished to do – even though he had given her a carte blanche. She felt like smashing his car, but instead chose to make a video, which challenged and even altered her aggression: “That was my catharsis.”

“I’m not more colourful than life is.” The screen is like “a moving glass painting” to Rist, who enjoys the playful use of colours. Moreover, she feels that a lot of people distance themselves from colour, even finding it intimidating. Rist, however, wants to fight for colour: “They call it superficial, but actually it’s dangerous.”

Elisabeth Charlotte “Pipilotti” Rist (b. 1962) is a Swiss visual artist, who works with video, film and moving images, which are often displayed as projections. She takes her name from Pippi Longstockings, heroine of Swedish author Astrid Lindgren’s much-loved series of children’s books. Early on in her career she began making super 8 films, which generally last only a few minutes and contain alterations in their colours, speed and sound. Among the themes her work centres on are gender, sexuality and the human body. In 1996 her work was first featured in the Venice Biennial, where she was awarded the ‘Premio 2000 Prize’. Other awards include the ‘Wolfgang Hahn Prize’ (1999), the ‘Joan Miró Prize’ (2009) and the ‘Cutting the Edge Award’ at the 27th Annual Miami International Film Festival (2010). Rist’s works are a part of prominent museums worldwide such as MoMA in New York City and Tate Modern in London.

Pipilotti Rist was interviewed by Christian Lund at the Hayward Gallery in London, November 2011. 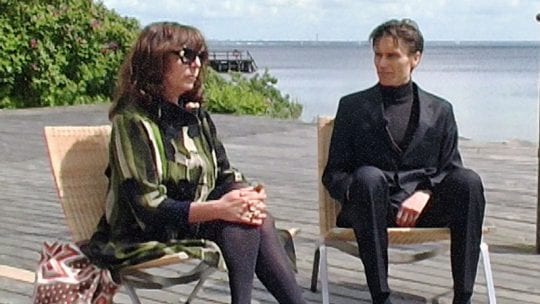 Sophie Calle
Conversation with the Nameless