Learn about the intriguing philosophy and projects of the award-winning Norwegian Reiulf Ramstad Architects in this interview with its founder, Reiulf Ramstad: “Architecture is on trial in relation to the development of the way we live.”
Read more …

“We believe that architecture makes sense when it’s anchored in the locations where it’s built and the people who are going to use it.” Ramstad isn’t occupied with “the zeitgeist of architecture,” but rather tries to uncover the character of a given place before starting to design for it: “Each project has a story which is like a novel that contains its own axis. And to find the axis for each project is what occupies me.”

Reiulf Ramstad Architects’ way of testing architecture was very significant for the Trollstigen Visitor Centre (2014) project, where they had to create test elements in order to find out whether they would resist the surrounding environment: “I believe we’ll need that insight in the years to come because the climate will change, the weather will be more brutal.”

“The climate has made us very pragmatic … And that pragmatism prompts you to do what is necessary.” The outlying areas – that exist in Nordic countries such as his homeland Norway – hold a great interest to Ramstad due to their uniqueness and the possibilities they represent: “In the big global melting pot, we end up living the same way, eating the same food, wearing the same clothes. In that way outlying areas are a kind of test bed for devising new things.”

Reiulf Ramstad (b. 1962) is the founder, Graduate Architect and Design Director of Reiulf Ramstad Architects (RRA) – an award-winning architecture, landscape architecture and design firm founded in 1995 and based in Oslo, Norway. The firm is internationally known for their work in Norway, and their designs range from private residential to large civic works, such as schools, restaurants, public transit stations, museums and tourist routes. For more see: http://www.reiulframstadarchitects.com/ 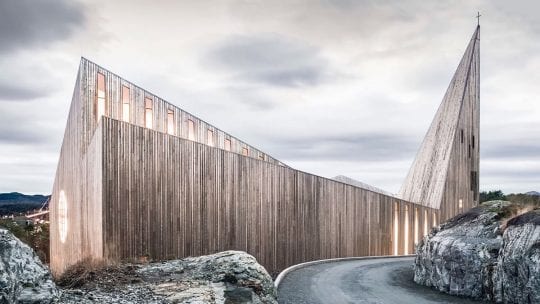 “The landscape is the foundation for our architecture.”