“If it repulses you, do not look at it.” Watch the iconic “cartooning couple” Robert Crumb and Aline Kominsky-Crumb on stage. In this video, they talk about their close to fifty years together, from their first meeting to collaborating and giving the world a version of their marriage – their “love story” – through their joint comic strip. Read more …

“It was the early seventies, it was crazy, it was a time of free love, and nothing was normal. So why should our relationship have been normal either?” The couple shares how, before meeting Aline, Robert was already drawing a character with her last name – Honeybunch Kominsky. At the time of their first meeting, Robert already had a wife – and a girlfriend – so “it was a little bit complicated,” but the two were drawn together, and in the autumn of 1972, they started doing comics together. Initially just for fun and to pass the time because Aline had broken her foot: “We made it really crazy, but then a publisher saw it and wanted to publish it, and so we said: Why not?” They recall how many feminists from the women’s comics collective in the 1970s disliked not only Robert but also Aline, who didn’t portray herself as a heroic figure “conquering male-chauvinism.” Aline too considered herself a feminist, but wanted “to be as free as a man, and have as much sex as I possibly could, and be as bad and wild as I could.” In connection to this, Aline is quite clear in her response to people, who find the cartoons degrading: “It’s a lot better to draw it than it is to impose it on other people.”

Robert and Aline also talk about how they work and both agree that working together is much easier than working alone: “She’s just such a natural-born Jewish comedian, it just comes out of her, it just pours out of her all the time. She always keeps me laughing,” Crumb says of Aline, who adds that she likes working with Robert because he can keep her on the subject. The couple feel that people take things too seriously nowadays and that sometimes you have to go back to the very beginning of why you do things: “I wanted to do art that people read in the toilet, and now I have my work shown in New York at the fanciest art gallery in New York, fifty years later.”

Aline Kominsky-Crumb (b. 1948) is an American cartoonist. Kominsky-Crumb’s work, which is almost exclusively autobiographical, is known for its unvarnished, confessional nature. Solo work includes ‘The Bunch’s Power Pak Comics’ (1979-81), ‘Love That Bunch’ (1990), and ‘Need More Love: A Graphic Memoir’ (2007). She is also one of the cartoonists behind ‘Dirty Laundry Comics’, and cofounder of ‘Twisted Sisters’. In 2016, Comics Alliance listed Kominsky-Crumb as one of the twelve women cartoonists deserving of lifetime achievement recognition.

Robert Crumb (b. 1943) is an American cartoonist. Crumb, a counterculture comic book artist and social satirist, has enjoyed cult status for his underground comic strips, full of anti-heroes. Among these is a wide range of popular characters including Fritz the Cat and Mr Natural. Much of his work has also appeared in Weirdo magazine (1981-1993), which he founded himself, and which was one of the most prominent publications of the alternative comics era. Crumb has received several accolades for his work, including his induction into the comic book industry’s Will Eisner Comic Book Hall of Fame in 1991 and the Angoulême Grand Prix in 1999. Crumb was also among the artists honoured in the exhibition ‘Masters of American Comics’ at the Jewish Museum in New York (2006-2007). In 2012 a retrospective of Crumb’s work was exhibited at the Musée d’Art Moderne de la Ville de Paris. He has frequently collaborated with cartoonist Aline Kominsky-Crumb, with whom he is married, and the couple has made a joint comic strip based on their life together through four decades. A collection of the comics, ‘Drawn Together’, was published in 2012. In 2017, David Zwirner Gallery in NYC held a joint exhibition of Robert and Aline’s artwork: ‘Aline Kominsky-Crumb & R. Crumb: Drawn Together’.

Robert Crumb & Aline Kominsky-Crumb were interviewed on stage by Martin Krasnik in connection with the Louisiana Literature festival at the Louisiana Museum of Modern Art in Humlebæk, Denmark in August 2019. 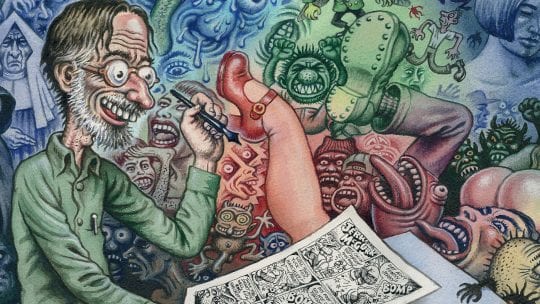 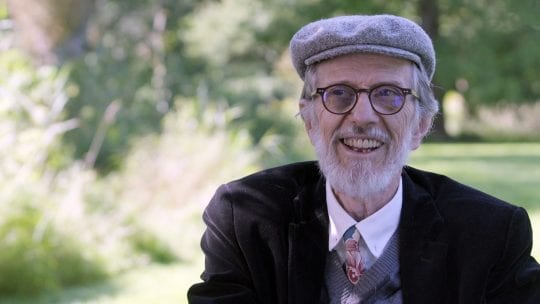 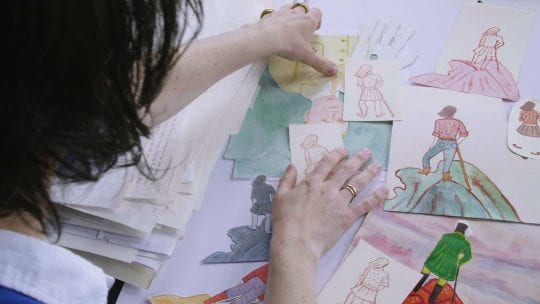