Does copying other prominent artists such as Jackson Pollock really make you an artist? Find out in our interview with American painter Robert Longo, who calls himself an image thief. Read more …

When Robert Longo embarked on the project of copying several iconic pieces of art, the artists gave their permission and the museums opened up their doors to him. Each piece was photographed at least fifty times, as Longo sought to capture all the details, trying to understand what was going on and what had happened: “It was like seeing the set for a murder investigation.”

“Making art is like this process that is a balance between something that is very personal but also socially relevant.” Longo continues. This is why the pieces of art featured in the show, which is presented in this video interview, represent abstract works, which he has a personal attachment to. The works are from between 1948-1963 (post-World War Two) and embody the freedom of leaving behind Old World Europe as well as the hope of what America could be. Moreover, they parallel Longo’s own life as he was born in 1953.

Playing with texture, investigating the performative nature of 20th century painting and translating works into black and white from colour photographs with the use of charcoal, are at the core of what attracts Longo, who likes “the twist of making a charcoal drawing based from a photograph of a painting.” This is furthermore something that he has mastered in such a degree, that it is often hard to tell his drawings from the paintings – or photographs – he is copying: “I finally got really sick of people looking at my drawings and telling me they really like my photographs.”

Robert Longo (born 1953) is a New York-born and raised painter and sculptor, who was part of the New York City underground art scene of the 1970’s. It was in the 1980’s, however, that Longo became widely known for his ‘Men in the Cities’ series, which depicted sharply dressed men and women in twisted positions. He has had retrospective exhibitions at places such as the Hamburger Kunstverein and Deichtorhallen, the Los Angeles County Museum of Art, the Museum of Contemporary Art in Chicago and the Isetan Museum of Art in Tokyo. His work is represented in collections of The Museum of Modern Art, the Guggenheim Museum and the Whitney Museum of American Art in New York, the Art Institute of Chicago, the Los Angeles County Museum of Art, the Walker Art Center in Minneapolis, the Stedelik Museum in Amsterdam, the Centre Georges Pompidou in Paris, the Albertina in Vienna and the Ludwig Museum in Cologne. Robert Longo was the recipient of the Goslar Kaiserring in 2005. He is also a co-founder and member of the band X PATSYS, in which one of the other six members is his wife, Barbara Sukowa. He lives with his wife and their three sons in New York.

Camera & edit: Per Henriksen, Out of Sync
Produced by: Out of Sync and Marc-Christoph Wagner
Copyright: Louisiana Channel, Louisiana Museum of Modern Art, 2014 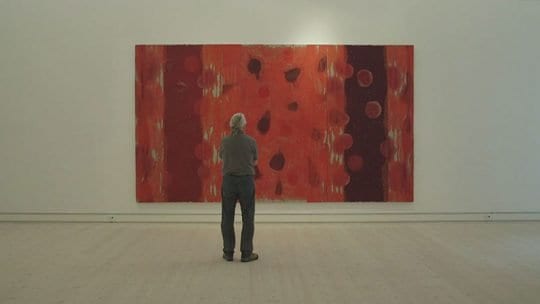 Ian McKeever
Mystery to the Viewer