“Every inch of canvas is visually arresting. The parts are as compelling as the whole. To say it is beautiful is to do the work a disservice. Instead, it is overwhelming,” the acclaimed writer says of a massive painting by American painter Julie Mehretu, who she feels “disrupts the discipline of architectural drawings” and imposes her artistic will. Read more …

“I admire the audacity of that, of using architectural drawings not as instructive but rather, as deconstructive,” Gay continues, sharing her thoughts on Mehretu’s painting ‘Easy Dark’ (2007).

Julie Mehretu (b.1970) is an American artist, who works in the field of painting, drawing and printmaking. Mehretu is particularly known for her large-scale, gestural paintings that are built up through layers of    acrylic paint on canvas overlaid with mark-making using pencil, pen, ink and thick streams of pain. Her work has been exhibited at the Sydney Biennial (2006), Solomon R. Guggenheim Museum in New York (2010), La Biennale di Venezia (2019), and Los Angeles County Museum of Art (2019), among others. Mehretu has received several prestigious awards including the U.S. Department of State Medal of Arts Award in 2015.

In the video, Roxane Gay reads a text about Julie Mehretu. The text is called ’The Perfect Equilibrium’, and the focus of the text is ‘Easy Dark’, 2007 by Julie Mehretu written for the anthology ‘Looking Writing Reading Looking – Writers on Art from the Louisiana Collection’ (2019). More information here: https://www.artbook.com/9788793659216.html 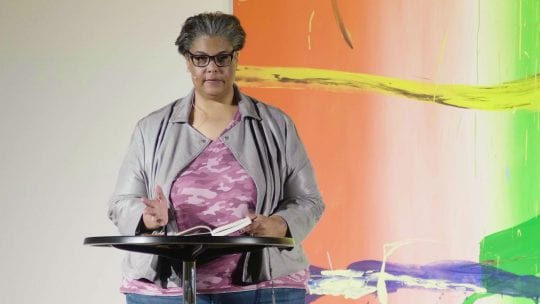 "I need to understand at all times the distance between him and me."