Salman Rushdie
A Chance of Lasting

“I feel very proud to be part of this resistance”, says the acclaimed British writer Salman Rushdie reflecting on his book The Satanic Verses and the years of the fatwa. “Today people are much weaker. I wonder if such an act of collective solidarity would ever happen again.” Read more …

“My parents used to say, that I always wanted to be a writer”, this conversation with acclaimed British writer Salman Rushdie (b. 1947) begins. Rushdie talks about his early love for reading, his Indian childhood and his father, who told stories to him instead of reading them out loud.

Rushdie talks about his early attempts of writing, starting with commercials. Rushdie also reflects on his close relations to filmmakers and musicians in the Britain of the 1970’s. Looking back, Rushdie is sure, why he became a writer, having a talent for language: “It needs some form of solitude in your nature. That you prefer doing something by yourself. A screenplay for example is only a step on the way to a film. I just thought, I like to do it by myself. But it took me a very long time to do find out how to do it.”

Midnight’s Children, published in 1981 and dealing with India’s transition from British colonialism to independence and the partition of British India, changed Rushdie’s life. The novel won the Booker Prize and later the Bookers Booker Prize and was added to the list of Great Books of the 20th century. “Writing the book took me five years. I am very proud of that young man who struggled to find out how to write without any guarantee, that the book would be published. I was pretty sure it was a good book. But I had no confidence in the fact, that anybody else would agree. Midnight’s Children then told me, that I was the writer I could be.”

“As an author of literary fiction you are writing books that you hope will endure. That will sit on the bookshelf and outlast the author. It’s now 33 years since Midnight’s Children was published. The fact that people still read it, the fact, that young people still read it and find, it has something to say to them, that’s very satisfying.”

This conversation with Rushdie then circles around The Satanic Verses and the debate after it’s publication. “The fatwa wasn’t only about me. It was a moment, when a line had to be held, when you could not concede the fight.”

Rushdie talks about the years of hiding, his relationship to his son and how reading and literature helped him through those dark years. He reflects about the solidarity he received as well as about the fight to keep The Satanic Verses in print: “The reason why we managed to defend the book was that very widespread belief that it had to happen – not so much for the book itself, but for this old reason: the freedom of speech. People, whom I had never met, went to battle for me – booksellers, publishers, ordinary people, who bought the book as an act of support and solidarity. That was their way of saying: I am on your side.”

“Mostly in those years, I was touched and impressed by the degree of solidarity, that there was. Mostly! There are always some people who fall short of what your expectation is. The great mass of writers and book-world-people understood, that something serious was at stake, in which they all were implicated. Politicans as often came very late to the party.”

And Rushdie continues: “I feel very proud to be part of this resistance. Today people are much weaker. I wonder if such an act of collective solidarity would ever happen again. We have fallen a long way short of the strength that people collectively showed in the late 80’s and early 90’s.”

Rushdie ends by reflecting about his autobiographical book Joseph Anton: A Memoir. “I finally reached the point, where I was able to write the book and look back at the things that have happend. It was clear to me, that it was me, who should write this story.” Rushdie also speaks about the role of literature in a fearful world – a world of darkness. Literature, he says, has to challenge the narratives, we surround ourselfes with – the narrative of family, politics, whatever. As a writer, he says, I feel it is my responsibility to speak up and to give back some of the solidarity, I have received myself earlier.

Salman Rushdie (b. 1947) was born in Mumbay and is the author of worldwide bestellers like Midnight’s Children and The Satanic Verses. The latter caused fierce protests in the Muslim world. Death threats were made against Rushdie, including a fatwa issued by the Iranian leader Ayatollah Khomeini on 14 February 1989. In his latest autobiographical novel, Joseph Anton: A Memoir, Rushdie reflects upon his decade of hiding. 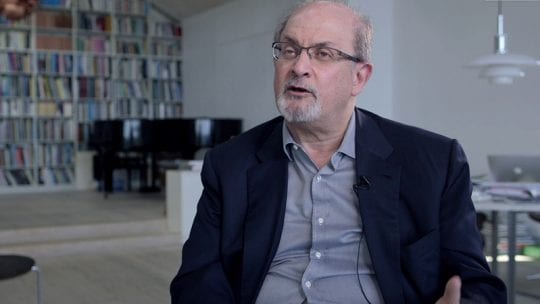 Salman Rushdie
A Line Had to be Defended