Get closer to contemporary Latin American literature in this conversation between two friends and writers, Mexican Valeria Luiselli and Argentinean Samanta Schweblin – on feeling passionate about their work, living abroad and writing in and out of your mother tongue. Read more …

“I fell in love with literature reading Latin-American writers… but when I discovered the North American writers I felt that drive to deconstruct a text,” says Schweblin. In the 1990s when she was a teenager in Buenos Aires and started buying books, ninety per cent of the new arrivals were translations of North American writers and hardly any from e.g. Europe. For Luiselli, who started reading while living in South Africa, her books were in Spanish brought to her by her sisters from Mexico: “So my introduction to literature in English, which indeed has been one of my two pillars as a reader, started with the worse ones, what you read at school… awful works that no one should never ever read.” It was at secondary school in India that she connected to her mother tongue when she started reading books aloud in Spanish – with a Spanish-speaking group – by writers such as Gabriel García Márquez: “So English literature has been part of my education, but despite living and studying in English-speaking countries, my introduction to literature was through Spanish.”

“I was fascinated by their passion. I felt that they were manipulating something that I was missing out on and that it was the best thing in the world.” Schweblin initially trained as a plastic artist, inspired by her grandfather who did an engraving workshop, which she helped him with from a very young age. The obsession and dedication of the people she met there inspired her immensely, and she has held on to the connection with the plastic and visual: “As soon as I feel lost when I’m writing, I put the computer aside and I grab a pencil and a paper, and in that connection with objects I get hold again of that passion that I always missed and pursued.” Luiselli had early aspirations to be a dancer, but likewise ended up taking a different road though she is still passionate about dancing: “I thought of it as a career, it was my real passion apart from reading and writing, but I was really lucky to discover early enough that I was really bad.”

“In the end, you’re a stranger. Writing always has something to do with that.” Both writers live abroad and feel that this affects their writing in the sense that it enables them to look at their country from a distance. For Schweblin “Berlin is a white and pure desk that shelters and isolates me, and that’s perfect for my writing. But to what extent can you live in that isolation?” At some point, she feels, you have to go back “in order to be reunited with all the noise and everything you try to get away from.” Luiselli, who has lived in New York for almost ten years, agrees that living abroad offers a form of “invisibility” and allows you to view your country “from a distance to your immediate reality.” Luiselli adds that before embarking upon her first book, she decided that she would write it in Spanish and not English, which had been the language of her education: “Spanish could be some kind of playground.” She did, however, begin to write in English, when her daughter started speaking it: “It became a familiar language at a deeper level – not like a mother tongue, but a ‘daughter tongue.’”

On the subject of the freedom of writing, Luiselli feels that not losing that freedom is the only thing that makes your task interesting and worthy, and Schweblin follows up by arguing that “literature is always a journey that promises to learn something new that is vital…Something that is going to really shake you up.” Luiselli follows up on this by quoting the Russian Soviet poet Vladimir Mayakovsky: “The experience of good literature, like great friendships, come out of the revelation of a secret. Not in the sense of revealing something dark, but a passion that is suddenly transmitted or shared.”

Samanta Schweblin (b. 1978) is an Argentinian writer. Her first publications – two slim volumes of prose, ‘The Core of the Disturbance’ (2002) and ‘Birds in the Mouth’ (2009) – immediately led to her international breakthrough. Her short story collections have received numerous awards, including the prestigious Juan Rulfo Story Prize. Her original short novel ‘Fever Dream’ (2017, originally published 2014) is her first novel translated into English and was shortlisted for the 2017 Man Booker International Prize. Both Mario Vargas Llosa and the literary magazine Granta have proclaimed Schweblin as one of the most interesting contemporary young Spanish-language writers. She lives and works in Berlin.

Valeria Luiselli was born in Mexico in 1983 but, the daughter of a diplomat, spent her childhood traveling the world. Her award-winning novels have aroused media attention as an important part of a new wave in Latin-American literature. She is the author of the internationally acclaimed novel ‘Faces in the Crowd’ (2014, originally published 2011), which won the Los Angeles Times Art Seidenbaum Award for First Fiction. Her 2015 novel ‘The Story of My Teeth’ won the Los Angeles Times Prize for Best Fiction and the Azul Price in Canada. Luiselli is also the recipient of the National Book Foundation ‘5 under 35’ award (2014). Her work has appeared in publications such as The New York Times, Granta and The New Yorker. She lives and works in New York City.

Samanta Schweblin and Valeria Luiselli were interviewed by Peter Adolphsen at Hotel Rungstedgaard in Denmark in connection with the Louisiana Literature festival in August 2017. 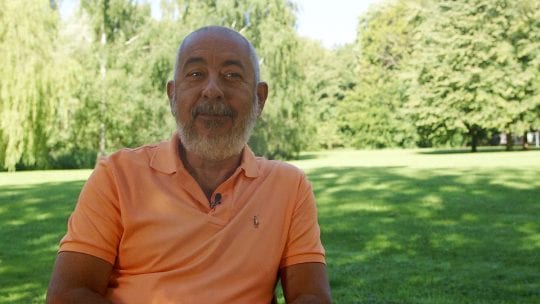