Murata feels very much inspired by the Japanese writer named Rieko Matsuura. “Originally, I was really restricted by the idea of being a woman or a human being. I really disparaged and restricted myself. But she taught me that I could live in another way. She writes stories about a person who becomes a dog or about a woman whose big toe becomes a penis. I read all her stories very eagerly. Not just because they were strange; they really saved me. They set me free. They freed my soul. I was not just a human being or a woman. She took me to a place where I was a creature in my own right. And I am very grateful for that,” Murata says.

Sayaka Murata is born in 1979. She is considered one of the most striking prose writers of contemporary Japanese literature. Until recently she worked in a convenience store, where she drew inspiration for her big literary breakthrough, Convenience Store Woman, which has sold over a million copies in Japan. The novel is about the outsider Keiko, who works in a convenience store in Tokyo. The work is routine but allows her to disappear into the role of “a normal human being,” among other ways by imitating her colleagues’ ways of speaking and dressing. “Unsettling and totally unpredictable,” Sally Rooney has called the novel.

Murata has won several prizes, including the Gunzo Prize for New Writers, the Mishima Yukio Prize, the Noma Literary New Face Prize, and the Akutagawa Prize. Her books have been widely translated. Besides ‘Convenience Store Woman’, which came out in English in 2018, her novel ‘Earthlings’ appeared in English in 2020. 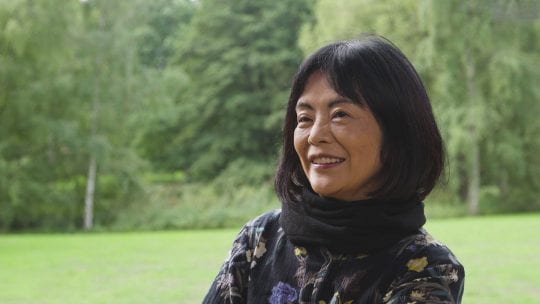