“I always say that if anyone is going to overthrow the current government, it’s the Iranian women.”

Meet the internationally acclaimed Iranian artist and filmmaker Shirin Neshat in this extensive video interview. With her film ‘Looking for Oum Kulthum’ (2017) as the starting point, she speaks openly about contemporary Iran, about being a strong female artist in a male-dominated environment, and how her personal, socio-political narratives embody the duality she feels inside. Read more …

In work such as ‘Looking for Oum Kulthum’ – which explores the life of the legendary Egyptian singer Oum Kulthum (1902-1975) – Neshat tries to get under the skin of strong female artists from the Middle East: “I’m very fascinated by the seductiveness of certain woman artists who, regardless of their very difficult lives and situations (…), have the ability to seduce such a large audience.” She explores the prize that many women have to pay in order to pursue their passion without compromising, an issue, which she finds is also relevant in the West. Working as a female film director, Neshat is interested in how a lot of powerful women have to act like a man in order to be taken seriously – to keep a sense of authority and control – and “how you become desexualized in a way that you become like a man.” In continuation of this, she expresses her fascination with Iranian women, and how, when under extreme pressure, their tendency is to revolt, which is the opposite of the common western perception of them: “I always say that if anyone is going to overthrow the current government, it’s the Iranian women.”

On the subject of Iran’s history and it’s current “absolute disregard for human rights,” Neshat comments that “there have been very unfortunate and tragic historical events that cannot be erased and has brought the  culture into a very bad point.” She feels that it is impossible to think about existential issues without the counterpoint of socio-political realities – such as religion – and her work always contains these contrasts: “There’s this constant reminder of very painful experiences, and at the same time we’re in a very beautiful setting.”

Shirin Neshat (b.1957) is an Iranian visual artist, known primarily for her work in film, video and photography. Neshat gained international prominence in 1995 with her iconic series of black and white, calligraphy-overlaid photographs ‘Women of Allah’, and broke new ground winning the Golden Lion award at the Venice Biennale (1999) for her video installation ‘Turbulent’ and the Silver Lion at the International Venice Film Festival (2009) for directing ‘Women Without Men’. Among other works are ‘Soliloquy’ (1999), ‘Possession’ (2009), ‘Illusions & Mirrors’ (2013) and ‘Looking for Oum Kulthum’ (2017). Neshat has won prestigious awards such as the International Award of the XLVIII Venice Biennale (1999), the Grand Prix at the Kwangju Biennale (2000) and Hiroshima Freedom Prize from the Hiroshima City Museum of Art (2005). Solo exhibitions include shows at the Museo de Arte Moderno in Mexico City, Contemporary Arts Museum in Houston, Walker Art Center in Minneapolis, Art Institute of Chicago and Serpentine Gallery in London. She lives and works in New York City.

Shirin Neshat was interviewed by Marc-Christoph Wagner at Faurschou Foundation in Copenhagen, Denmark in connection with the exhibition ‘Shirin Neshat, Looking for Oum Kulthum’ in March 2018. 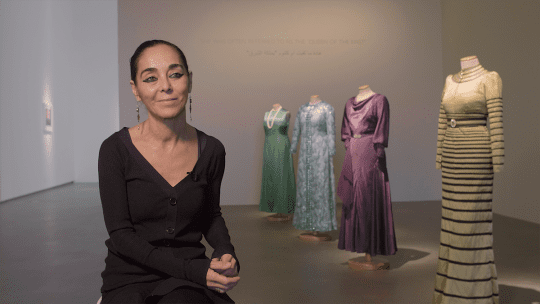 "Feminism in the Middle East, particularly Iran, is much stronger than in the West."

Shirin Neshat
It Remains on the Surface