“When you start as a poet it makes you aware of how few words are needed to bring ideas from one mind to another.” Icelandic writer Sjón is a word-minimalist. Watch him explain why he gives his readers a minimum of words to work from. Read more …

The strength of Icelandic literature is its ability to absorb foreign literature: “All of the great moments in Icelandic literature are marked by a strong dialogue with foreign literature or foreign culture.” Sjón’s writing is inspired by the Icelandic sagas, which despite their length have a limited and direct vocabulary and a compact, almost anecdote-like form. Though he uses few words, Sjón likes to bring together different ‘textures’ within the same story and by this he is still able to achieve a wide-ranging form of narration: “I can speed up the story very fast, I can slow it down, I can use dialogue, I can use a text that pretends to be an article from a journal, I use two poems… So within 140 pages I think you get very varied use of language even though it’s not many words.”

In an attempt to heighten the sense of reality of the fictional world in a new way, Sjón has begun to step forward with selected information about his own life, letting the reader have a peak at the reality that lies behind the story: “I didn’t want the character in the book to meet my real life grandfather because there is a difference between those two realities. So they almost meet. And this is maybe the place where literature happens. It’s in this almost-encounter of reality and fictional reality.”

Sjón (b. 1962 as Sigurjón Birgir Sigurosson in Reykjavík) is an Icelandic writer, poet, playwright and lyricist. He received the Nordic Council’s Literature Prize in 2005 for his novel ‘The Blue Fox’ (‘Skugga-Baldur’, 2003). Sjón has been active on the Icelandic music scene since the early 1980s and is also known for his collaborations with legendary Icelandic musician Björk and was nominated for an Academy Award as well as a Golden Globe for the song ‘I’ve Seen It All’ from the film ‘Dancer in the Dark’. Sjón lived and worked in London for several years and currently resides in Reykjavík with his wife and children.

Sjón was interviewed by Bjørn Bredal in connection to the Louisiana Literature festival at the Louisiana Museum of Modern Art, Denmark in August 2014. 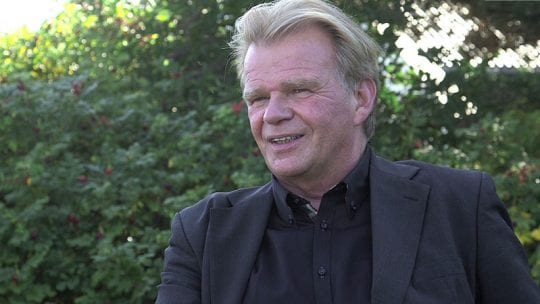 Einar Már Gudmundsson
I Believe in the Question Mark