”In some ways, I think this tragedy gave a sense of purpose to people that was very positive. And we tried to translate this feeling into the building.” Interview with architect Craig Dykers of Snøhetta about the 9/11 Memorial Museum Pavilion at Ground Zero. Read more …

Craig Dykers, leading partner at the world famous Norwegian architecture office Snøhetta, here shares his personal thoughts on forming and building one of the central places that commemorates the victims of the 9/11 terrorist attacks on New York.

On this day that changed the world, Dykers was on his way from Oslo to New York, as he recalls: ”The moment our plane was diverted, we were above Long Island – it was the moment, when the second airplane crashed into the tower. We did not know, what it was, but when I looked out of the window, I saw smoke on the horizon.”

On 9/11, Dykers experienced the worst and best of human kind – people killing others and people rushing to rescue those who could be rescued. ”When you confront a tragedy, it is always a transformative experience. You go through different stages of understanding. Obviously the first stage is shock that’s usually followed by a sense of yearning. And then when you move through these circles intellectually, you realize one day that you are alive. And that you have to show the strength of being alive to those around you. This building is meant to be part of this cycle.”

Expanding on the thoughts that went into the building, Dykers continues: ”Designing this building was challenging, as there was no building, when we arrived. None of the skyscrapers you see today existed. It was a non-site without ground to stand on.”

”We wanted a very horizontal building, a very horizontal geometry that complimented the 9/11 Memorial and provided a feeling of continuity. Moreover, we wanted to create for the visitor a sense of descending into the earth, when entering the museum, and likewise ascending back into daily life, when leaving it.”

Snøhetta is named after a famous mountain in Norway. Besides the 9/11 Memorial Museum Pavilion at Ground Xero, the architecture office is world famous for the Alexandria Library in Egypt and the Norwegian National Opera and Ballet in Oslo, Norway. Recently, the office has been commissioned to complete the San Francisco Museum of Modern Art, the restoration of the Grand Palais in Paris, the reconstruction of Times Square in New York City and the museum for the historic cave paintings in Lascaux, France. Snøhetta has also designed the new Norwegian banknotes. From the very beginning in the 1980’s, Snøhetta’s architecture has been inspired by landscapes, both natural and urban. ”Landscapes are a massive force”, says Kjetil Trædal Thorsen, co-founder and director of Snøhetta: “And they are masterpieces, which architects can be inspired by.” A longer interview about the architectural philosophy of Snøhetta can be found here: https://channel.louisiana.dk/video/sn%C3%B8hetta-memories-architectural-l….

SNØHETTA has won numerous international awards including the Mies van der Rohe European Prize for Architecture, the Aga Kahn Prize, and has twice won the World Architecture Award for Best Cultural Building. The work of Snøhetta is characterized as having a presence that resonates with its surrounding context. Craig Dykers, a founding partner of the company, served as the Executive Architect for the National September 11 Memorial Museum Pavilion.

Craig Dykers was interviewed by Jesper Bundgaard/ Out of Sync, in New York City in 2014. 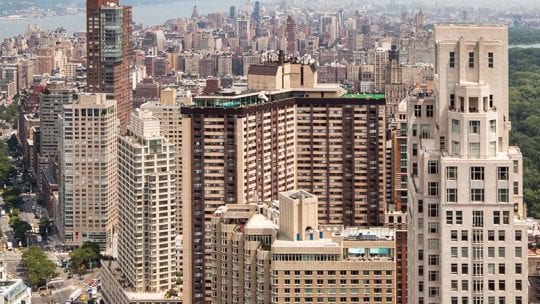