Danish artists Superflex confront the idea of Europe in their visually beautiful but disturbing and eye-opening film ‘Kwassa Kwassa’, which deals with the dangerous journey between two islands, one of them located in the outermost region of the EU. Read more …

It all began in 2014 when Superflex were invited by the French Cultural Ministry to do a public arts commission on two French islands – Anjouan and Mayotte – located between Madagascar and Mozambique. While they were filming the movie in the Indian Ocean, 8000 kilometres away from Europe – where they met with human smugglers and boat builders, who made boats for migrants – the refugee crisis happened back home, which “spiced things up mentally.” As a consequence, the movie then also came to be about the idea of Europe: “It was a strange, almost surreal feeling of being very close to this issue, and then very, very far away.”

“For me, it became a very direct ‘smash in the face’-situation, where you need to understand how complex it is.” As a migrant, the journey to Mayotte is one of great danger – the boat is overcrowded and the sea wild and full of sharks. Moreover, they don’t consider themselves to be refugees at all, many of them simply want to visit relatives or go to a hospital with better facilities. Because of the Frontex border they have to pass, a journey of 60-70 kilometres, which would normally take two to three hours can sometimes take up to 25-30 hours: “Everyone is a potential boat user, taking that dangerous voyage.”

“The starting point of the movie was to focus on the boat builder and also the boat as such – as this kind of medium that can transport you into another situation.” A lot of the film shots are done with drones and the idea of freedom and escape is emphasized by the sensation that is created when filming from the air.

Superflex is a Danish artists’ group founded in 1993 by Jakob Fenger, Rasmus Nielsen and Bjørnstjerne Christiansen. They describe their projects as “tools”: a model or proposal that can actively be used and further utilized and modified by the user. Their oeuvre spans from beer (‘Free Beer’) and soda (‘Guaraná Power’) to alternative energy production methods to movies and installations, and their projects are often related to economic forces, democratic production conditions and self-organization. Superflex have gained international recognition for their projects and have held solo exhibitions at venues such as Kunsthalle Basel in Switzerland, Schirn Kunsthalle in Frankfurt am Main, Mori Museum in Tokyo and the Hirshhorn Museum and Sculpture Garden in Washington D.C. Furthermore, they have participated in various art biennials throughout the world. For more about them see: http://superflex.net/

Featured in the video are extracts from the film ‘Kwassa Kwassa’ (2015), which is directed by Tuan Andrew Nguyen and Superflex. The film portrays a boat builder on the island of Anjouan in the Comoro Islands. The boats are used for fishing but also to transport migrants to the neighbouring island of Mayotte (French overseas territory in the outermost region of the EU) 70 kilometres away. ‘Kwassa Kwassa’ (meaning “unstable boat”) intends to use the construction of the boat as a carrier of migrants on a dangerous ocean in a complex political setup as well as their symbolic meaning as a carrier of dreams of reaching a better life on the other shore. 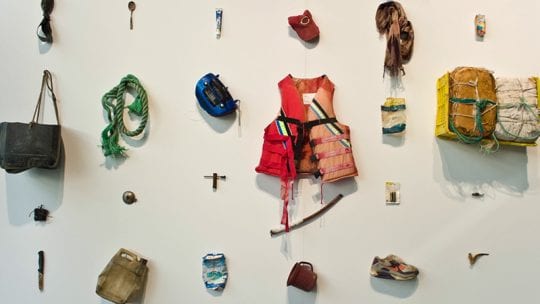 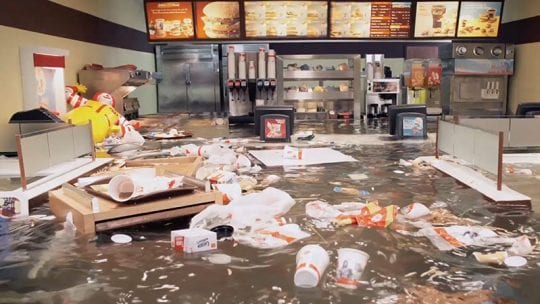 Superflex
Why We Flooded McDonald’s