Shortly before he turned fifty, we had the unique pleasure of spending six months with Danish artist Tal R, while he was in the process of making his grand series of nine enormous railcar-paintings, ‘Habakuk’. Watch the intimate and biographical film. Read more …

“There’s one character, in the world of characters, that I like the most, and that character is the colon.” Tal R uses the colon to illustrate the relationship between the past, present and future. In this film, Tal R – on the brink of turning fifty – looks forwards as well as backwards and shares what being an artist and a human being means to him, and why the two can’t be separated.

It’s the pictures that have something capricious within them that truly touches the Danish painter: “If you want an aesthetic discussion about when a picture is fabulous, it’s when something in the picture is an unpredictable movement.” Furthermore, as an artist, you have to be as mystified as the observer: “For instance, if an artist paints a store front, part of the drama is imagining what’s inside the store.”

What happens when something from the outside “breaks” or “besmirches” culture? Tal R feels that this is when progress happens: “Within most contexts it’s a catastrophe if you don’t speak the language, but I think nothing opens up language more than those so-called linguistic catastrophes.”

Tal R (b. 1967) is a Danish painter and former guest professor at Kunstakademie Düsseldorf. Born Tal Rosenzweig in Tel Aviv to a Danish mother and Czechoslovakian Jewish father, the family moved to Denmark, where Tal R was raised. The title of the series of paintings featured in the film, ’Habakuk’ (2017), is Tal R and his sister’s nickname for their father. Tal R is widely considered to be one of the main forces in bringing painting back after conceptual art dominated the art scene in the 1990s. His work has been shown internationally, e.g. at ARoS Aarhus Kunstmuseum in Aarhus, Pinakothek der Moderne in Munich, Contemporary Fine Arts in Berlin, Camden Arts Centre in London and Louisiana Museum of Modern Art in Humlebæk, Denmark.

Tal R was interviewed by Kasper Bech Dyg and Marc-Christoph Wagner from December 2016 to May 2017. 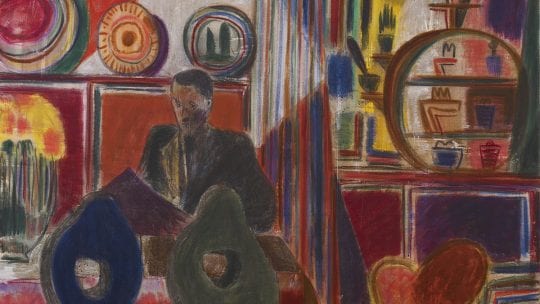