Meet Terunobu Fujimori, one of Japan’s most influential architects, who has enchanted the world with his playful, often elevated buildings made of natural materials such as wood, earth and stone. In this short video, Fujimori talks about his original interpretations of a traditional Japanese building – his iconic raised tea houses. Read more …

“I started to design tea houses because I was interested in the idea of flexibility and a fun design in a small space.” One of the reasons why the teahouses have flexibility, Fujimori explains, is due to the caste system of 400 years ago (when the Japanese style building was first established), which was suspended inside the tea house: “Everyone was equal inside the tea houses and enjoyed being together. And it is the same now. Inside the tea houses, we don’t think about social status, rich and poor. We just spend time together.” This feeling of freedom inside the tea house is what he tries to preserve when designing the building. In connection to this, Fujimori comments on architecture’s unique ability to please people regardless of their preferences: “So its role is to make people comfortable when they use it.” Moreover, it is essential for Fujimori to place the tea houses in such a way that they blend in with nature, and because of this, he builds with only natural materials from the location.

Terunobu Fujimori (b.1946) is a Japanese architect and leading historian of modern Japanese architecture. His work is characterised by humour, experimentation, the use of natural materials, and a break from traditional techniques. In 1991, Fujimori completed his first architectural work, the Jinchokan Moriya Historical Museum in Nagano Prefecture. Since then he has created several original buildings including Takasugi-an Tea House (2004), Charred Cedar House (2007), and Flying Mud Boat (2012). Fujimori gained widespread acclaim when he designed the Japanese Pavilion at the 2006 Venice Architecture Biennale. He is the recipient of several awards including the Architectural Institute of Japan Prix (2001).

Terunobi Fujimori was interviewed by Kasper Bech Dyg at Ordrupgaard in Charlottenlund, Denmark in May 2018 in connection with his site-specific Japanese tea house, ‘Tea Tree House’. 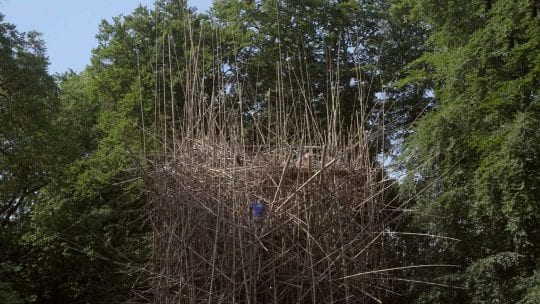