We had the unique pleasure of meeting the great avant-garde filmmaker Jonas Mekas (b.1922 – d.2019), who never went anywhere without his camera. Mekas here shares his fascinating personal story and shows us around his workspace in Brooklyn, New York.
Read more …

Mekas feels that he grew up in Paradise until the Soviets came: “… they brought hell, and my paradise ended.” The Russian tanks began rolling in the very same week that Mekas got his first still camera, and his first picture was thus of these Russian tanks – until a lieutenant took his camera and smashed it: “That was the beginning of my film and photography career – my first image ended up under the Russian soldier’s boot in the dust of my village.”

Even though Mekas has experienced ten years of hell during and following World War II, he does not want his movies to reflect this: “Why should I represent and show in my movies any of the hell, which we see already in life…” Mekas and his brother arrived in New York in 1947: “We came like empty sponges ready to absorb anything that was there.” After a couple of years they realized that cinema was more than the Hollywood cinema they had been exposed to back home, and the footage that Mekas had initially just made as a form of practice, was eventually transformed into his first diary film, ‘Walden.’

“Chance has it’s own logic.” In the 1960’s, when no one wanted to distribute or finance Mekas’ films, he and a group of other filmmakers – including Robert Frank – created The Film-Makers’ Cooperative, which provided them with the freedom to create whatever they wanted. This came to have a great impact on the community of independent filmmakers, as it proved that money wasn’t the most important factor when trying to make interesting movies. It was also in connection to The Film-Makers’ Cooperative that Mekas met Andy Warhol, who hung out in the loft, where the filmmakers met, and whom he later made a movie with: “I did not know him at all. There were people sitting on the floor, and he was there on the floor like everybody else. But then somebody said: “You don’t know Andy Warhol? He’s been in your loft for a month – and you don’t know him?” So I was introduced to him, and that’s how we met.”

Jonas Mekas (b.1922 in Lithuania – d.2019) is an experimental filmmaker and poet. He has filmed artists such as Andy Warhol and Allen Ginsberg, and his movies include ‘The Brig’ (1963) – which won him the Grand Prize at the Venice Film Festival the same year –, ‘Walden’ (1969), ‘Lost Lost Lost’ (1976), ‘Scenes from the Life of Andy Warhol’ (1990), ‘As I was Moving Ahead I Saw Brief Glimpses of Beauty’ (2000) and ‘Sleepless Night Stories’ (2011). Since 2000, he has expanded his work into the area of film installations, exhibiting at prominent venues such as the Serpentine Gallery, the Centre Pompidou, Musée d’Art moderne de la Ville de Paris, Moderna Museet, PS1 Contemporary Art Center MoMA and the Venice Biennale. Mekas is also responsible for the legendary Movie Journal (from 1958) in the Village Voice, and in 1964 he founded the Filmmakers’ Cinematheque, which eventually grew into Anthology Film Archives, one of the world’s largest and most important repositories of avant-garde cinema and screening venue. Moreover, he is one of the co-founders of New American Cinema Group. Mekas currently lives and works in New York City. For more about him see: www.jonasmekas.com

Jonas Mekas was interviewed by Kasper Bech Dyg in his home in Brooklyn, New York in November 2014. 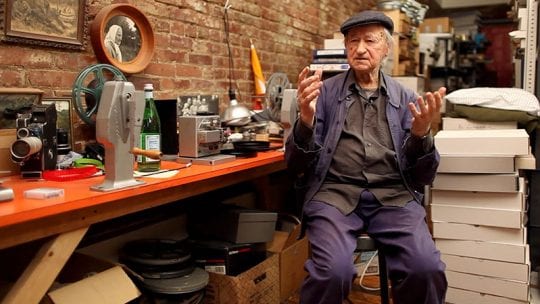 Jonas Mekas
Advice to the Young