Thomas Zipp
Everybody is a Freak

“I believe that everybody is a freak in a way. That’s what we have to accept.” Come along into the dark, uncanny – and yet humorous – world of Berlin-based artist Thomas Zipp. He here talks about letting go of ‘normality’ and the inherent potential of art. Read more …

Zipp, who began his career as a musician, considers music to be his artistic start. But whereas he sees music as ‘time-based’, giving you only a specific time slot to make things work, he considers art to be constant, enabling you to always come back to it. There are, however, also similarities between the two: “I hope that what I put in can be transported in a way so that when somebody looks at it, it’s vibrated like when you hear music.”

“There’s no normality at all.” Zipp feels that people have to embrace the weird and unpredictable and stop trying to control everything. You don’t have to know everything about everything in order to understand it, which is also the case with paintings. Moreover, he sees the system of society as fragile: “Society works pretty well, but if there’s some little disturbance, the whole card-house falls together.” Art, however, possesses a certain power, which transcends this. As an artist, you have the advantage of being able to express yourself in a freer way than e.g. a scientist: “As an artist you can go in every direction, more or less.”

Thomas Zipp (b. 1966) is a German artist based in Berlin. He works with installations of paintings and sculptures, which have been described as blackly comic and trained on what Zipp himself calls “the weirdness of mankind.” His preferred palette is that of ash white, granite grey and black, and a characteristic theme could e.g. be the interior of an old psychiatric ward or an iconic surrealist painting. Moreover, Zipp counterpoises historical figures from the world of art and music with those from science, religion and politics. His work has been shown at international galleries and museums such as Tate Modern and Saatchi Gallery in London, Transmission Gallery in Glasgow and MoMA PS1 in New York.

Thomas Zipp was interviewed by Marc-Christoph Wagner in connection to his exhibition ‘Of the other tomorrow’ at Avlskarl Gallery in Copenhagen, Denmark in November 2015. 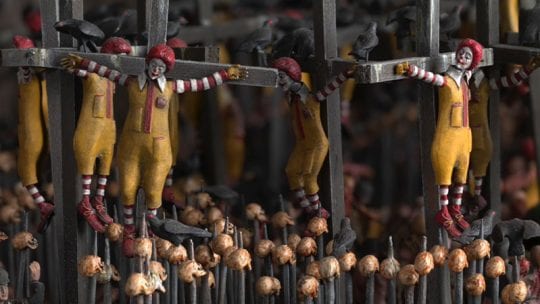