Ever wondered what 180 tons of Icelandic rocks would look like, filling up a museum of modern art? Follow the acclaimed writers Sjón, James McBride and Daniel Kehlmann, as they take a tour through ‘Riverbed’, created by Olafur Eliasson. Read more …

“It’s like something in a dream, when you enter a room. Something is not right, but familiar”, says Sjón .

This installation piece by the Danish-Icelandic artist Olafur Eliasson is challenging both the concept of the modern museum, and also how we look at and comprehend art. According to McBride “you become a part of the piece once you walk into it. This physical notion of being involved in the art is a very grand theme.”

What is art and what is nature? These are the questions Daniel Kehlmann reflects on when saying “art and nature are two opposing concepts, but the intelligent artist can blur that line.”

Sjón (b.1962) is an Icelandic writer, poet, and lyricist. He received the Nordic Council’s Literature Prize in 2005 for his book ‘The Blue Fox’. Sjón is also known for his collaborations with the Icelandic musician Björk.

James McBride (b. 1957) is an American writer and musician. McBride is best known for his 1995 bestselling book, ‘The Color of Water’ which spent more than two years on The New York Times’ Bestseller List, and has since become an American classic.

Daniel Kehlmann (b. 1975) is a German writer, already being compared to Nabokov and Proust. He is the writer of the highly acclaimed book “Measuring the World”, which is one of the best selling novels in Germany after 1945. 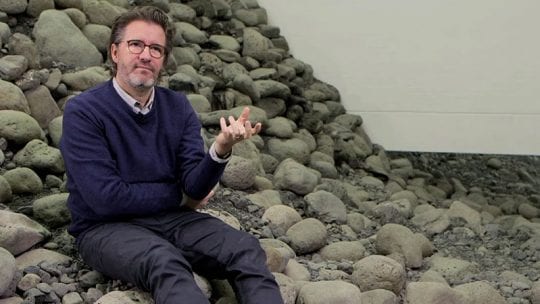