Get ready for a unique, extraordinary experience, as Japanese composer and sound-poet Tomomi Adachi’s performs with his special invention – an infrared sensor shirt, which creates sounds according to what Adachi says and how he moves. Read more …

Tomomi Adachi (b.1972) is a Japanese vocal and electronics performer, composer, sound poet, installation artist, instrument builder and occasional theater director, who makes improvised music with voice, computer and home-made instruments. Adachi studied philosophy and aesthetics at Waseda University in Tokyo. He has composed works for his own group “Adachi Tomomi Royal Chorus” which is a punk-style choir and he has performed contemporary music, including the world premiere of John Cage’s “Variations VII,” “Europera 5,” and “Waterwalk”. He is the only performer of sound poetry in Japan and has performed Kurt Schwitters’ “Ursonate” for the first time in Japan.

Tomomi Adachi performs at the Weiwei stage at Louisiana Literature, 2013. 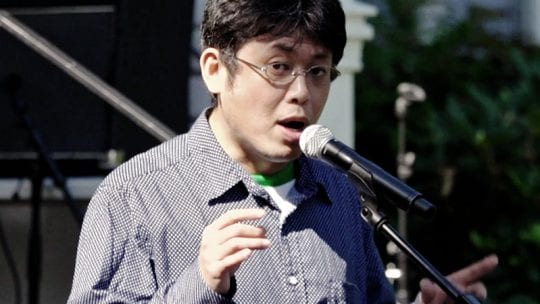