“Writing is the relationship between head, gut and hand.” Vigdis Hjorth is considered one of the strongest voices in contemporary Norwegian literature. She here shares why it is essential for her well-being to be able to express herself in writing. Read more …

“To me, writing is a sort of realization tool. Being able to express in words difficult issues or feelings gives you a huge sense of restraint and relief.” Hjorth feels that she has developed a habit of taking her most difficult questions to her desk in order to process them. Much in the same way, reading also calms Hjorth down and helps her sort her inner feelings out. In example, reading the Danish philosopher Søren Kierkegaard has had a great impact on how she sees herself in the world, and how being a mortal is a significant task as well as adventure: “By merely breathing and being alive I set things in motion. That’s a huge responsibility. A person can enter a room and change the room.”

Lately, the notion of “how hard it is to practice what you preach” has become more prevalent in Hjorth’s writing. It’s easy to paint a pretty picture of yourself, but what you are like in reality is something else: “I’ve come to realize that I’m not a pretty postcard.” Moreover, Hjorth feels that time and age has made her more confident as a writer: “I’m not afraid of tackling new and bigger questions than before.”

Vigdis Hjorth (b. 1959) is a Norwegian writer, who has published a large selection of novels, essays and children’s books since 1983. Her 20th novel ‘Arv og Miljø’ (Inheritance and Environment) was nominated for the Nordic Council’s Literature Prize 2017. The book deals with a family’s bitter inheritance dispute – and incest. The accusations about the father in the book led to intense debate in Norway about the boundaries between fiction and reality.

Vigdis Hjorth was interviewed by Anette Dina Sørensen at the Louisiana Museum of Modern Art in Denmark in May 2017. 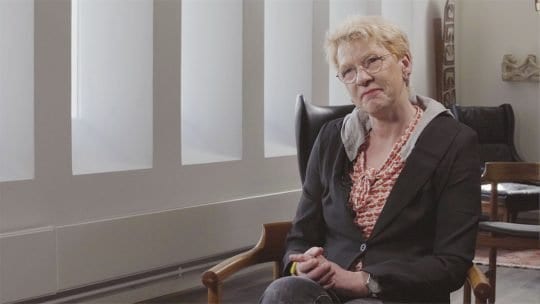 "When you start reading, you learn who you are and also who you aren't."

Beate Grimsrud
Who You Are