Kenyan artist Wangechi Mutu uses her colourful artwork to confront the missing attention to black women within society: “It’s kind of an ironic thing that I’m producing that image out of the very lack of it.”
Read more …

Mutu creates impressive collages of magazine cutouts, which stir up the image of the black woman in our culture: ”For me, every little bit of culture can be used to investigate almost any other bit of culture.”

The female body has been a central theme throughout Mutu’s practice, balancing the grotesque and beautiful with great precision and leaving the viewer in a constant limbo between the two. Another central point is the notion of action, letting the spectator sense that the work is part of something else, something bigger: “There is a dynamic quality to the work, even though they have been captured in one moment, there is movement.”

Wangechi Mutu (b. 1972) is a Kenyan artist, who lives in New York. Mutu is considered one of the leading contemporary African artists and her work has been exhibited at various museums such as Tate Modern in London, Centre Georges Pompidou in Paris and The New Museum and The Museum of Modern Art in New York. She holds a BFA from Cooper Union and a MFA from Yale University. 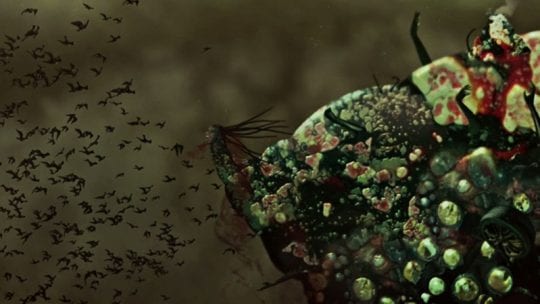 Wangechi Mutu
On The End of eating Everything