“There is a desperation in all certainty. The category of political uncertainty, philosophical uncertainty, uncertainty of images is much closer to how the world is,” says South African artist William Kentridge in this video presenting his work. Read more …

“The films come out of a need to make an image, an impulse to make a film, and the meaning emerges over the months of the making of the film. The only meaning they have in advance is the need for the film to exist”. William Kentridge (b. 1955) is South Africa’s most important contemporary artist, best known for his prints, drawings and animated films. In this video he presents his work, his way of working and his philosophy. He here tells the story of how he failed to be an artist: “I failed at painting, I failed at acting, I failed at film making, so I discovered at the age of 30 I was back making drawings”. It was not until he told himself he was an artist with all he wanted to included in the term – that he felt he was on the right track. “It took me a long time to unlearn the advice I had been giving. For for me the only hope was the cross fertilization between the different medias and genres.”

William Kentridge talks about the origin of his animated films with drawing in front of the camera. “I was interested in seeing how a drawing would come into being”. “It was from the charcoal drawing that the process of animation expanded”. With charcoal “you can change a drawing as quickly as you can think”. “I am interested in showing the process of thinking. The way that one constructs a film out of these fragments that one reinterprets retrospectively – and changes the time of – is my sense of how we make sense of the world. And so the animated films can be a demonstration of how we make sense of the world rather than an instruction about what the world means.”

“Uncertainty is an essential category. As soon as one gets certain their voice gets louder, more authoritarian and authoritative and to defend themselves they will bring an army and guns to stand next to them to hold. There is a desperation in al certainty. The category of political uncertainty, philosophical uncertainty, uncertainty of images is much closer to how the world is. That is also related to provisionality, to the fact that you can see the world as a series of facts or photographs or you can see it as a process of unfolding. Where the same thing in a different context has a very different meaning or very different form.”

“I learned much more from the theatre school in Paris, Jacques Lecoq, a school of movement and mime, than I ever did from the art lessons. It is about understanding the way of thinking through the body. Making art is a practical activity. It is not sitting at a computer. It is embodying an idea in a physical material, paper, charcoal, steal, wood.” William Kentridge will work on a piece not knowing if it will come out as a dead end or a pice of art, giving it the benefit of the doubt, not judging it in advance, he says. The artist has been compared to Buster Keaton and Gerorge Méliès. He mentions Hogarth, Francis Bacon, Manet, Philip Guston, Picasso, the Dadaists, Samuel Beckett and Mayakovski as inspirations. “I am considered a political artist by some people and as a non-political artist by other political artists. I am interested in the politics of certainty and the demagoguery of certainty and the fragility of making sense of the world”, William Kentridge states.

William Kentridge was interviewed by Christian Lund at the Deutsche Staatstheater in Hamburg in January 2014 in connection to the performance of the stage version of ‘The Refusal of Time’ called ‘Refuse The Hour’. 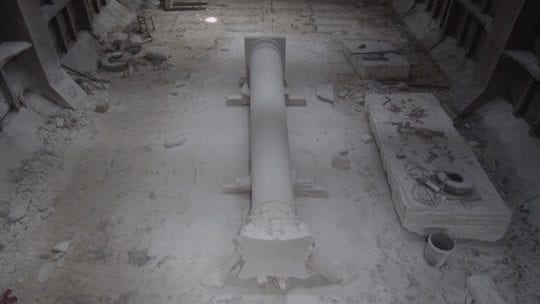 Adrian Paci
The Story of a Stone