“The world was such a better world in paintings than in reality.” Through paintings German filmmaker Wim Wenders discovered the possibility of a different world, and this would later come to define him as a filmmaker and photographer.
Read more …

A painter at heart, Wenders initially regarded film and photography as a simple way to record his surroundings and the camera as an extension of his painting tools. What he discovered, however, was that the camera could depict something that paintings could not – time. To Wenders, each photograph is a sort of time capsule, frozen in time but with an incredible relation to its own past and future, inviting the spectator to see more than any film could ever show. His desire is for the picture to not only convey a story about itself, but also about the person who took it. “I’m looking strictly for what I can learn about us”, he emphasizes.

Common for Wenders’ approach to both film and photography, is the starting point in painting and in particular the concept of frames. He considers the frame to be the defining factor – if it is not in the frame, then it is out: “The frame is the main act.”
In the end, Wenders became a filmmaker almost without being aware of it, and the transition from painting to photography and films was complete, as he puts it: “Eventually I realized I was no longer a painter.”

Wim Wenders (born Ernst Wilhelm Wenders in 1945) is the director behind movies such as ‘Paris, Texas’, the story of a man who returns to retrieve his life after a four year absence, ‘Wings of Desire’ (‘Der Himmel über Berlin’), which features an angel who falls in love with a mortal and thus wishes to become human, ‘Faraway, So Close!’ (‘In weiter Ferne so nah’), where a group of angels again look longingly upon the life of humans, ‘Buena Vista Social Club’, which documents a group of talented aging Cuban musicians, and ‘Pina’, a tribute to the late German choreographer, Pina Bausch. He has received a multitude of international awards, including the Palme d’Or, the BAFTA and the Golden Lion. Since 1996 he has been the president of the European Film Academy in Berlin. Apart from being a highly praised filmmaker, Wenders is also an acclaimed playwright, photographer and author.

Wim Wenders was interviewed by Marc-Christoph Wagner at Kunstforeningen Gammel Strand. Most of the photographs shown in this interview are part of the exhibition: ‘Wim Wenders – Places, strange and quiet.’ 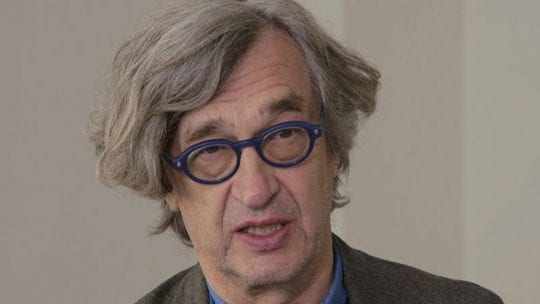 Wim Wenders
Advice to the Young