“The incredible changes that you go through, is life. Life is complex, confusing. The sky is very permanent, not changing.” Interview with the pioneering artist Yoko Ono about how life and art are connected in her work, which she sees as a means for simplifying things. Read more …

Yoko Ono talks of her performance Sky Piece to Jesus Christ (1965), her interest in music, her use of her voice, as well as more generally about her ideas and working methods. “I just wanted to clear the air” she says of her screaming. She also talks of the relationship between body and mind, and how the body is a kind of material, you can work with. Her interest is mainly the spirit, or concept of things: “We’re all together in a thing called life. It’s really great. And it’s very interesting, because the wind is blowing, the weather, the temperature, or the light, and I’m suddenly standing in another country. Very real.”

Yoko Ono (b. 1933) is a Japanese avant-garde artist and musician. Ono was born in Tokyo, but moved to New York when she was 18, becoming becoming an influential practitioner of conceptual and performance art in the 1960s and consequently one of the most important representatives of the fluxus movement. As a musician, Ono embarked on a music career with Yoko Ono/Plastic Ono Band (1970) and also collaborated with huband and artistic partner, musician John Lennon (b.1940-s.1980), on Grammy Award winning albums such as ‘Double Fantasy’ (1980). In 1989, the Whitney Museum of American Art in New York City presented a retrospective of Ono’s work, and in 2000 the retrospective, ‘Yes Yoko Ono’, opened at the Japan Society Gallery in New York City and traveled extensively thereafter. In 2015, the Museum of Modern Art in New York City presented a retrospective of her early art. Among several prestigious awards, Ono received a Golden Lion for Lifetime Achievement at the 2009 Venice Biennale.

Yoko Ono was interviewed by Synne Rifberg at Louisiana Museum of Modern Art in Humlebæk, Denmark. 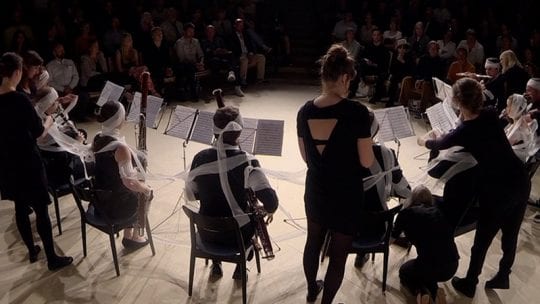