“It’s outrageous and it’s far worse than what we had in our dictatorships back then”, says German writer Herta Müller about Vladimir Putin and Russia’s interference in the Ukraine. Read more …

“I imagine that I am in their country. I would have risked as much as the Ukrainians in order to live another way”, says the winner of the 2009 Nobel Prize in Literature in this outspoken conversation at this years Louisiana Literature festival.

“Putin can’t accept that the Soviet Union is gone. We have had it up to here. For decades they ruined our lives in Eastern Europe. Putin and his secret service should accept that we want no more of that.”

And Müller continues: “He should build infrastructure in that huge country of his and see to it that his people can have teeth and shoes. That should give him plenty to do, so he won’t have to worry about war.”

Herta Müller (b. 1953) is a German-Romanian novelist, poet and essayist. In 2009 she received the Nobel Prize in Literature. Born in the small village of Nitchidorf in Romania, her native language is German. Müller is noted for her works depicting the effects of violence, cruelty and terror, usually in the setting of Communist Romania under the repressive Nicolae Ceausescu regime which she has experienced herself. Her much acclaimed 2009 novel The Hunger Angel (Atemschaukel) portrays the deportation of Romania’s German minority to Stalinist Gulags during the Soviet occupation of Romania. On October 8th, 2009, the Swedish Academy announced that she had been awarded the Nobel Prize in Literature, describing her as a woman “who, with the concentration of poetry and the frankness of prose, depicts the landscape of the dispossessed.”

Herta Müller was interviewed by Danish writer and journalist Niels Barfoed at the Louisiana Literature festival 2014. 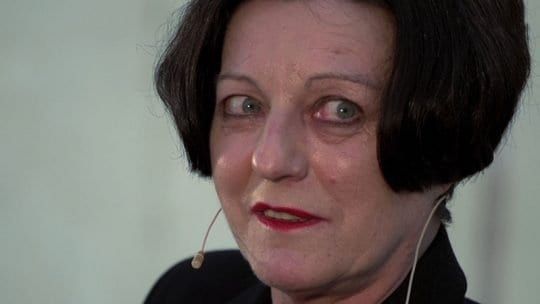