László Krasznahorkai is considered one of the most significant contemporary Hungarian writers and has been compared to authors such as Dostoyevsky and Kafka. In this video, he talks warmly about his friend, the iconic American Beat poet Allen Ginsberg, in whose New York apartment he lived in the 1990s.
Read more …

“It was easy to be friends with him.” Krasznahorkai met Ginsberg in the mid-1990s, and the latter offered to let him stay in his tiny apartment with “potty-green” kitchen cabinets: “The only other time I’d seen one like that was in Poland in the early 1970s.” Krasznahorkai describes how Ginsberg lived very modestly – even puritanically – all his life, but that his generosity was tremendous and his door always open: “If you stayed there for any amount of time you’d inevitably meet his friends: People from the Beat Generation and from the NYC scene of the time.” Krasznahorkai recalls how there was a show on at the Whitney Museum called ‘The Beat Generation’ for which all the living Beat greats came to stay at Ginsberg’s place: “Seen from a distance, it’s incredible. This is how I see it now. But then, it was quite natural.” While staying there, Krasznahorkai was stuck in a plot, and Ginsberg helped him: “It was thanks to his advice that I figured it out,” he says, adding that Ginsberg was continually giving.

László Krasznahorkai (b. 1954) is a Hungarian novelist and screenwriter. Among his works are ‘Satantango’ (1985), ‘The Melancholy of Resistance’ (1989), ‘War and War’ (1999), and ‘Baron Wenckheim’s Homecoming’ (2016). He has had a long-running collaboration with Hungarian filmmaker Béla Tarr, with whom he has adapted several of his novels into films. Krasznahorkai has been honoured with numerous literary prizes, including the 2015 Man Booker International Prize, the 2019 National Book Award for Translated Literature, and the highest award of the Hungarian state, the Kossuth Prize. Writer and admirer Susan Sontag described Krasznahorkai as the “contemporary Hungarian master of the apocalypse who inspires comparison with Gogol and Melville.” For more see: http://www.krasznahorkai.hu

Allen Ginsberg (b.1926 – d.1997) is an American poet, philosopher and writer. As a Columbia University college student in the 1940s, he began friendships with William S. Burroughs and Jack Kerouac, forming the core of the Beat Generation. Among his most well-known books are ‘Howl and Other Poems’ (1956) and ‘The Fall of America: Poems of These States’ (1965-1971).

László Krasznahorkai was interviewed by Johan Lose in August 2019 in connection with the Louisiana Literature festival at the Louisiana Museum of Modern Art in Humlebæk, Denmark.

“I know that those people were there, but no one believes me now."

László Krasznahorkai
I Didn’t Want to Be a Writer 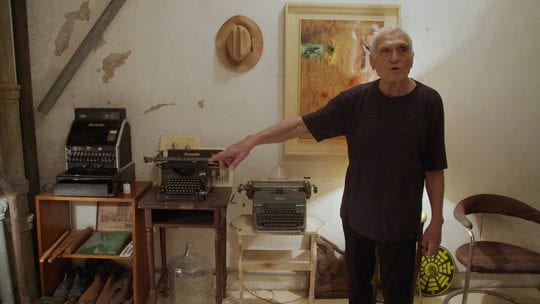