Meet internationally acclaimed conceptual artist Ryan Gander, who in this interview explains why the honesty of children is his biggest source of inspiration: “It’s almost like a child is a microcosm of the perfect spectator-spectacle relationship.” Read more …

Children are brutally honest when they come to a gallery, and this is one of their great forces: “They don’t have the all the cultural baggage that adults have. They’re not intimidated by being wrong or saying things that might seem crazy. Not intimidated by the elitism of the art world or their lack of knowledge of art history.” Gander, who has made artwork inspired by the resourcefulness of his own child – such as a marble cast of a den made from chairs and a sheet – feels that children’s responses to things are usually the right one, as it is also the first thing that pops into their mind: “It’s the most riveting response, ‘cause it’s honest.”

Ryan Gander (b. 1976) is an English conceptual artist, who works with a wide range of materials. His work ranges from a marble sculpture representing a shelter made by his four year old daughter, glass orb paperweights and maps to photography, films and drawings. Because he is a wheelchair user with a long-term physical disability, most of Gander’s art is completely removed from the hand of the artist and carried out by a team of technical specialists. His work for the 2011 Venice Biennale exhibition featured an action-figure sized sculpture that represents him while he falls from a wheelchair: “It’s a self-portrait in the worst possible position,” Gander stated. Works by Gander are included in both international public and private collections such as Tate Collections in London, Museum of Contemporary Art in Chicago, Museum Moderner Kunst in Vienna, Kadist Art Foundation in Paris and Museum Boijmans Van Beuningen in Rotterdam. His solo exhibitions include Palais de Tokyo in Paris (2012), Museo Tamayo in Mexico City (2012) and Solomon R. Guggenheim Museum in New York (2010). Gander lives and works between London and Suffolk with his wife and two children.

Ryan Gander was interviewed by Marc-Christoph Wagner in August 2015 in connection to his exhibition ‘Ryan Gander, The Canter of Edward de Bono – new works by Spencer Anthony’ at the David Risley Gallery in Copenhagen, Denmark. 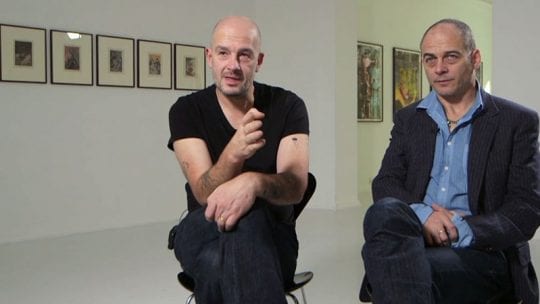