“The whiteness is unnatural, it’s in the way, it prevents seeing,” says the award-winning American poet and writer Claudia Rankine, who is describing a picture by the praised British photographer Paul Graham, who here “forces us to squint into the politics of our own seeing.” Read more …

At the centre of Graham’s white, overexposed photograph is a black woman, her arms slightly outstretched: “Does a photograph reflect the moment before the moment realized in the title? I am beginning to wonder if ‘outstretched’ is a way of saying yearning,” Rankine says, adding that the longing in the picture could be that of the photographer: “Perhaps then, the white haze enacts his own struggle to see what the American landscape renders invisible.” She draws parallels to writer Teju Cole’s book ‘Blind Spot’, where he recounts his temporary blindness, which Rankine considers a metaphor for how the lens of white dominance often disregards the needs and bodies of people of colour. In much the same way, she argues, Graham’s picture “mimics the blankness of the white gaze when confronted with the black figure.”

Claudia Rankine (b.1963) is a Jamaican-born American poet, essayist, playwright and editor. She is the author of several collections of poetry including ‘Citizen: An American Lyric’ (2014) and ‘Don’t Let Me Be Lonely: An American Lyric’ (2004). Rankine’s numerous awards and honours include the Jackson Poetry Prize, the PEN Open Book Award, the PEN Literary Award, and the National Book Critics Circle Award for Poetry. In 2019, she was inducted into the American Academy of Arts and Sciences.

Paul Graham (b.1956) is a British photographer. His works are held in the collections of MoMA in New York, Tate Gallery in London, and the Louisiana Museum of Modern Art in Humlebæk, among others. He is the winner of prestigious awards including the Deutsche Börse Photography Prize, the Hasselblad Award, and the inaugural Paris Photo-Aperture Foundation PhotoBook Awards Prize. ‘Woman with Arms Outstretched (Memphis)’ (2000) is from his series ‘American Night’ – a powerful meditation on race in America and the invisibility of the poor and the dispossessed, who have been edited out of our seeing.

In the video, Claudia Rankine reads a text about Paul Graham. The text is called ‘Open to Arrival’ and the focus of the text is Graham’s photograph ‘Woman with Arms Outstretched (Memphis)’ (2000) written for the anthology ‘Looking Writing Reading Looking – Writers on Art from the Louisiana Collection’ (2019). More information here: https://www.artbook.com/9788793659216.html

Cover photo: From ‘Woman with Arms Outstretched (Memphis)’ (2000) by Paul Graham. Courtesy of the artist 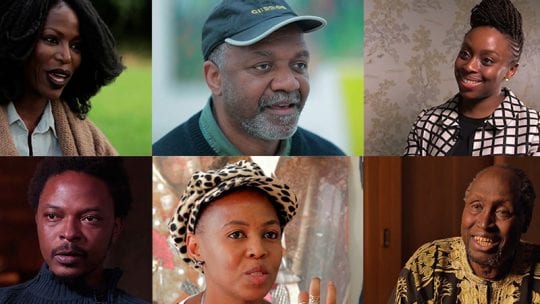