Meet a rising star on the international art scene – the young Sam McKinniss, who paints portraits inspired by Google images of the juggernauts of popular culture, such as Prince and Michael Jackson. He wants “big romantic subjects” held within one picture, and he wants your involvement: “I want your attention – I’m a jealous lover.” Read more …

“I’m hoping for one of these media encounters to set off a train of thought, where I can then frantically search the internet for an image that will hit me – everywhere I want to be hit.” McKinniss considers the people he paints to be characters that he’s pulling out of Google, newspapers or social media, and building into a narrative, which reflects his current mood. Being raised in suburban Connecticut, his father the pastor of an Evangelical church, he “grew up with a lot of evangelical instructions.” The religious fervour that surrounded him made him pay attention to symbolism and iconography, and as he watched Disney movies and later MTV, he came to realize that the impulse to worship a God was similar to worshipping a pop idol.

McKinniss feels that there’s a lot to be improved upon currently, and that we all need boost in the form of art. A good painting, he argues, can give you the kind of mind-blasting response that you get from a religious experience or drugs. His paintings, then, counteract the anxiety and stressfulness that he feels is predominant in our world today.

Sam McKinniss (b. 1985) is an American painter, who works from photographs and images found online. He is perhaps most well-known for his images from popular culture, floral still lifes as well as reclining male nudes. One of his great inspirations is the figurative French painter Henri Fantin-Latour (1836-1904) and his floral still-life paintings. McKinniss has exhibited at prominent galleries worldwide. He lives and works in Brooklyn, New York. For more see: http://www.sammckinniss.com/info/

Sam McKinniss was interviewed by Kasper Bech Dyg at his studio in Brooklyn, New York in September 2017.

Stills of paintings shown in the video: Courtesy of Sam McKinniss and Team Gallery 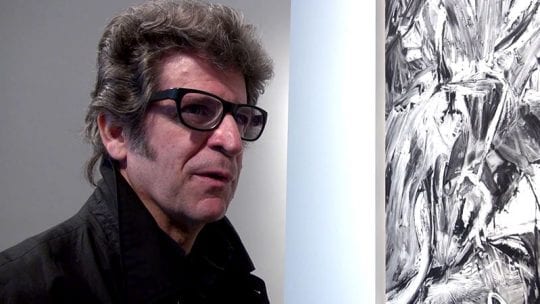